Firstly, the blog passed 2 milestones this week, this is the 50th post I've made, and secondly it just passed 25,000 views! Thankyou all so much for dropping in an viewing my work, and especially to those who take time to comment, I really appreciate it. 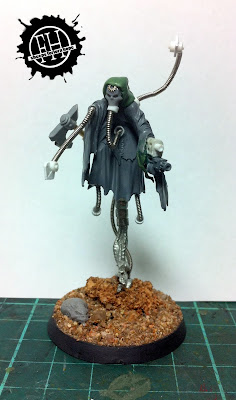 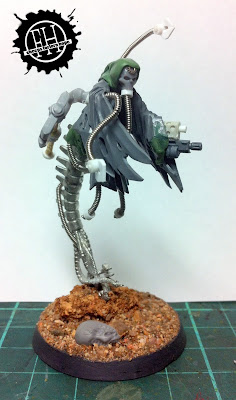 Now on to the real reason for the post. Finished the 2nd Magos, this guy will be used as a sorcerer in the current list, just to get some magic potential to the list, but also because puppetmastering a vehicle is so much fun :) 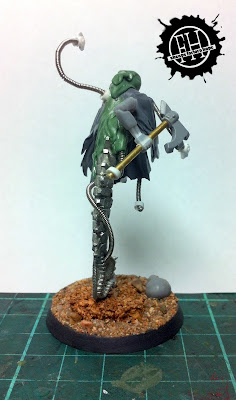 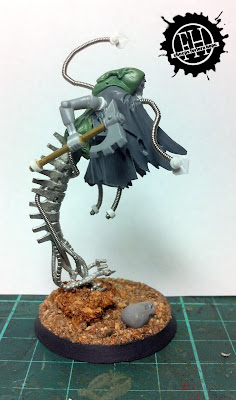 The base model is the plastic necromancer from WHFB, and a 4th ed necron wraith tail. the axe head is from a dwarf i think, which I carved the cog detail into. The head is obviously a necron warrior, and so it the third arm. 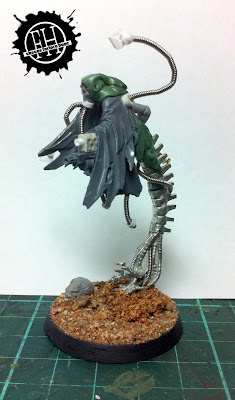 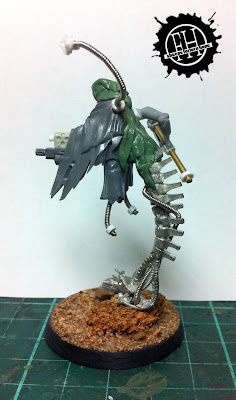 I might add some rivets to the arm, just to remove it from the necron shape a bit. Mechandrite tentacles are guitar wire bent with pliers.

The other thing I've been tinkering with is a gun servitor. Not exactly sure what I'll be using him for at this point, but mostly is just been an exercise is seeing if I can get the 1/48th scale kettenkrad to fit the 40k aesthetic. 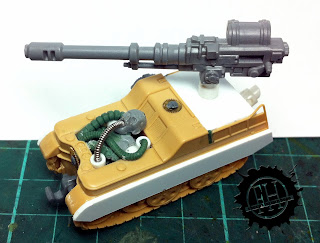 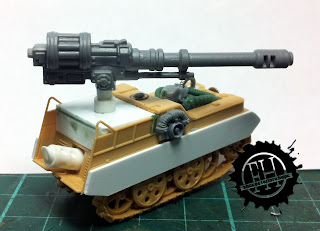 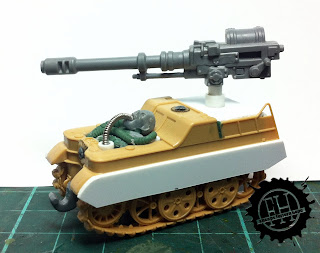 More rivets and details to add obviously. Most of the time I see scale kits turned into 40k models and shudder. The weapon isn't fixed, and so could be changed at this point for any of the imperial guard heavy weapons. I hope I can make something decent out of this guy, either way let me know what you think I should add.

I have no idea how this happened, but it was too cool not to share.

I was on google looking at dinosaur pics because of the leaked Lizardmen shots, and a notification popped up in my google account, and this was in there. Apparently google stitched together a gif for me from my last upload.
If this is the new evil empire, I for one welcome our new google overlords.
Posted by Sheep at 17:11 2 comments:

Assignment submitted, drank too much coffee, so I finished this guy because I couldn't sleep. 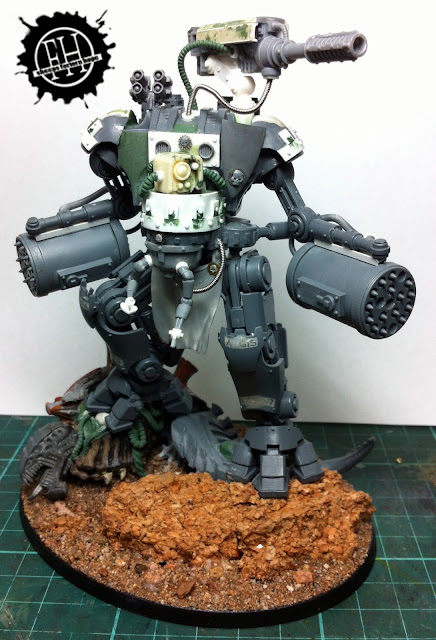 And he looks pretty damn good if I do say so myself. 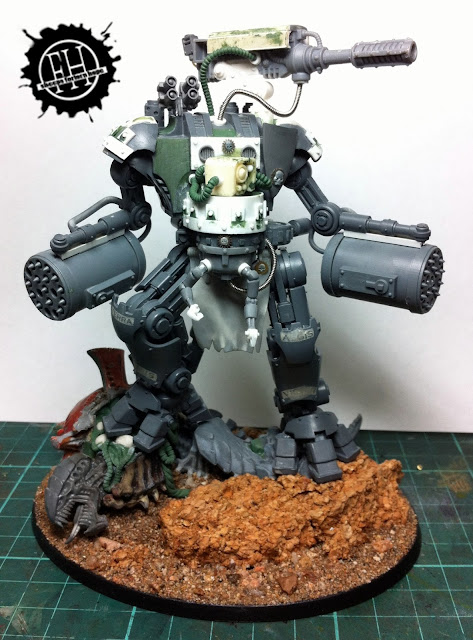 Additions since last update have been rivets on the cog motif on the shoulders, cables to the head, a smoke launcher, the shoulder cannon, and some manipulator arms. 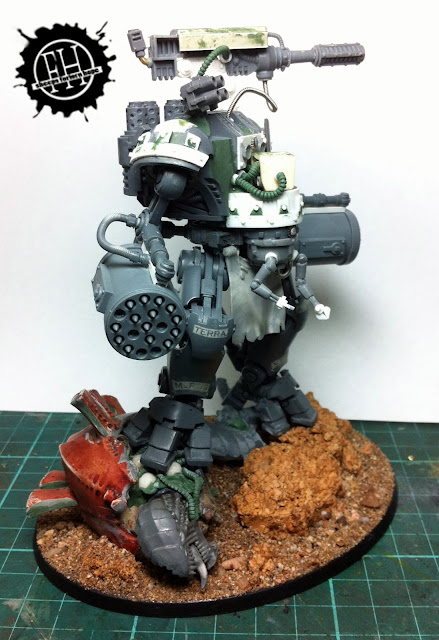 Plenty of images this time around. 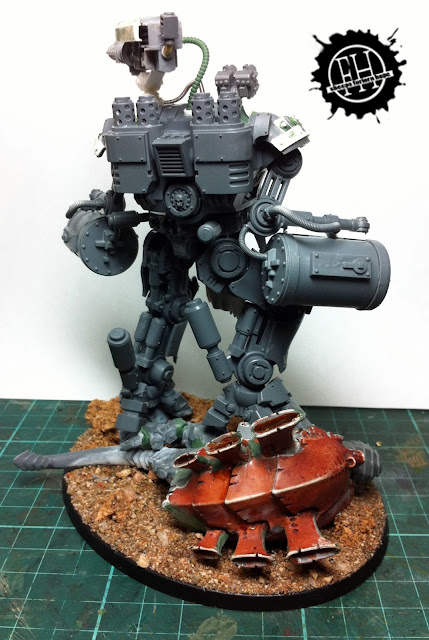 The rear is almost unchanged from the stock dreadknight kit, the only change I can think of is the removal of some cables on the legs that got in the way of the reposing. And since the legs are mirrored I had to remove them from the other side too. 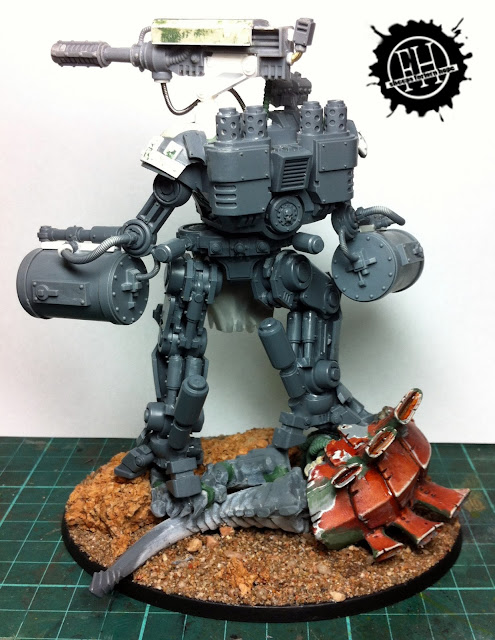 I may go back and add some cables to the legs, and some purity seals, but the major components and pose are locked in. 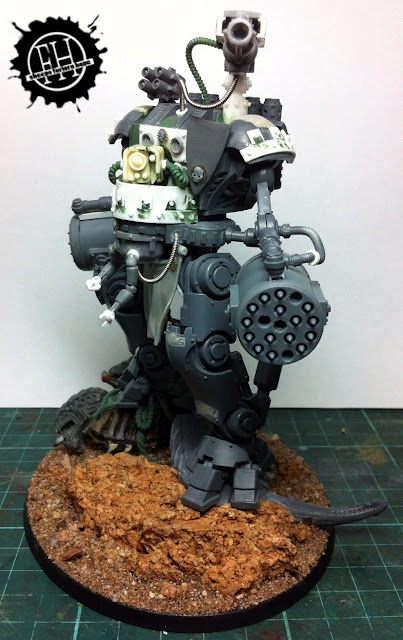 This shot shows the tracking of the shoulder cannnon relative to the head, I imagine that the cables snake in and out of the torso so as not to get too long or short and reduce the likelyhood of them snagging on anything. 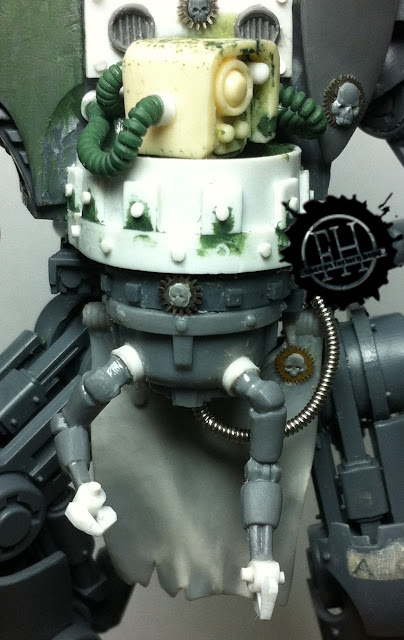 Close up shot of the head and manipulator arms. They were made with some necron warrior arms I found in my bits box, the hands were removed, and claws made out of plasticard tube and rod the same as the cultists, I think it gives some nice scale, and would allow the machine to manipulate small objects/assist in battlefield repairs of other robots or tanks in an emergency situation. 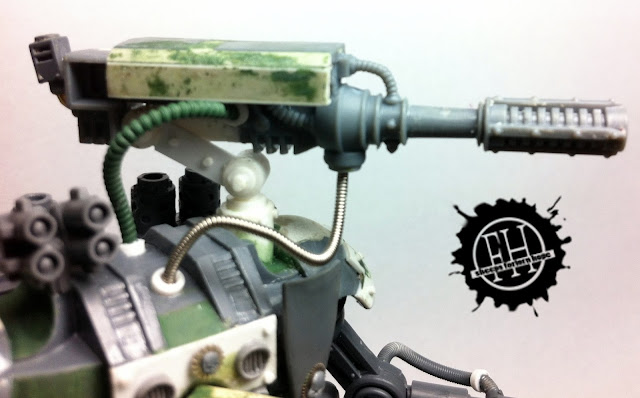 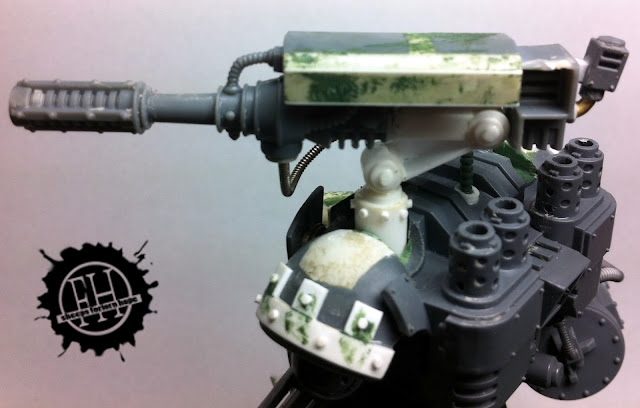 The cannon was converted from a sensor piece I found in my bits box, it comes either from the aegis line or the fortress of redemption set. I picked it up in a trade a while ago. The armour plating was made with putty and plasticard I-beam. The rotator mount from plastic tube and tube, and the arms of the articulator from square rod and L-beam.

The conversion has made me very happy, and is alot more involved then I had initially planned. The only additions I might make from here are the previously mentioned purity seals and leg cables, and maybe extending the plasticard cog motif to the knees or shins.

Thanks for looking and please let me know what you think.

Oh hello again . . .Wasn't expecting to be doing one of these again so soon. 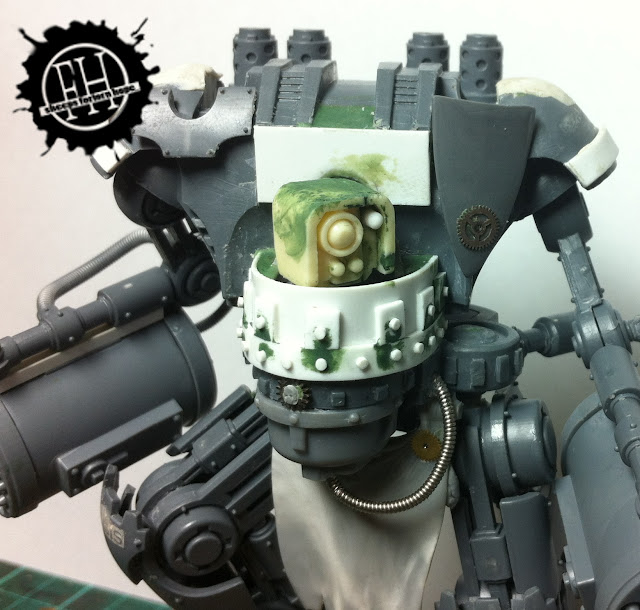 I'm never going to finish this assignment at this rate. . . but I will have a finished knight, so its not a complete waste.

I'm not really sure where I'm going with it to be honest, especially that white space behind the head, everything else is curved, and its just a panel of negative space. I'll admit I've just been making it up as I go along so the continuity of ideas is a bit disjointed.

The head is a cast of the SM apocalypse upgrade sensor cut in half, a half again removed and glued back together, there still needs to be some smoothing, but I have to wait for the GS to cure.

The torso has been filled out some, managed to fit a cog motif into the detailing, there will be some more on the shoulders to come. Replaced the tabard with something grander, more space for free hand. 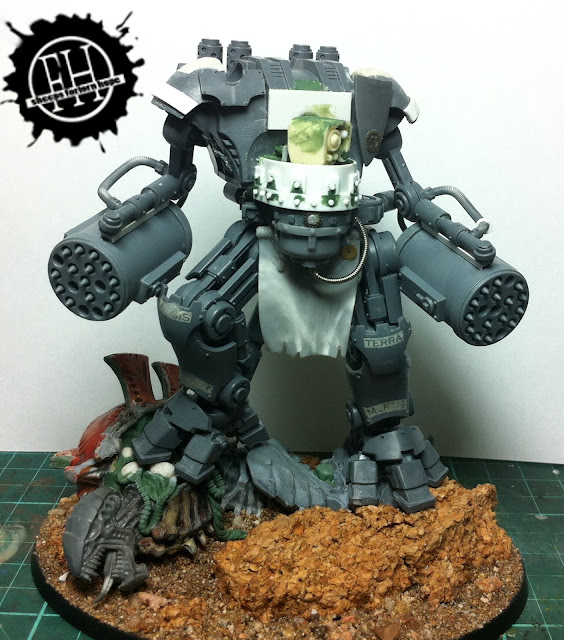 I bought a small bag of brass cogs from watches from a seller on ebay, and they've come in handy for some quick detailing. The shield will be split into thirds, with more free hand on the top two thirds split vertically.

I have a design for a shoulder cannon teasing me in the back of my brain, I just can't seem to get it to work in plastic or putty yet. plus I still don't know which shoulder to put it on, and once i do, what to do with the other shoulder.

The one thing I am worried about is that the head looks a bit too "tau". I blame the riptide, I wouldn't be thinking it if it didn't exist.

Any ideas or comments on my wandering thought processes would be greatly appreciated.
Posted by Sheep at 02:04 10 comments:

Welcome to another installment of Aaron's procrastination from study, today I can present some more WIP shots of 3 machine cultists, a knight, and his base. 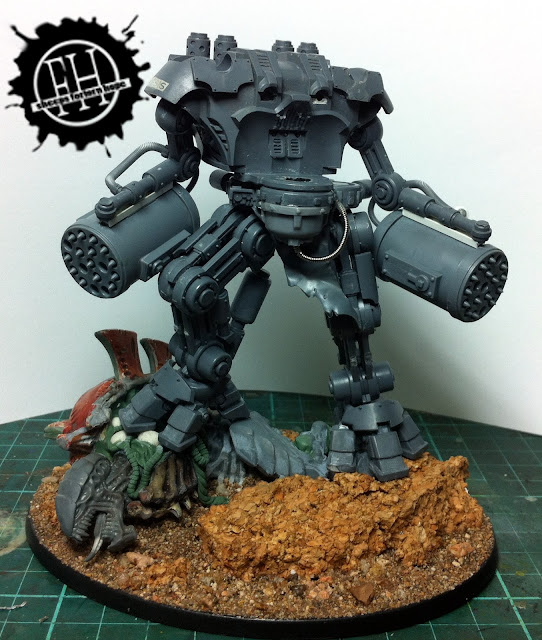 Firstly, the things that excite every Ad mech modeler, knights. I will be using this as a forge fiend in my current thinking, so another shoulder weapon will be added.

The base model is of course a dreadknight, and it still looks too much like one for me atm. I need to figure out a way to make a curved glacius plate of some kind, or some kind of sarcophagus like the SM dread. As a further tie in to the nids, hes posing in a suitably safari like stance on the body of his last victim. What colour blood do you think tyranids have? 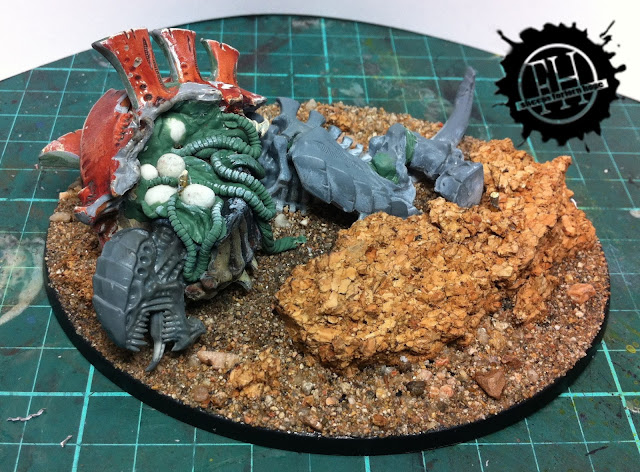 No idea what the physiology of a tyranid creature should look like, so some random balls of putty and entrail like tubes will have to do. Blood effects and burns like its been hit with a large plasma discharge are what I see in my mind for the damage, once I figure out the colour of the blood.

these have been made from the close combat equipped cultists and cadian arms. Alot of chopping and reposing went into getting the arms to sit flush, I used surprisingly little greenstuff on hiding the actual joins. They are suffering from a minor case of "gorilla syndrome" due to the difference in the size of the cadian and their original arms.

That's it for the moment, any suggestions on continuing the knight titan conversion would be appreciated.


I've managed to get a couple of commissions recently, I was approached to paint something for a system that I wouldn't normally look at because the models just don't interest me, Warmachine. However there has been one model I just loved from the moment I saw the WIP sculpts. The legion everblight Archangel.


It is a monster, gargantuan in every sense, and so cool I would have eventually gotten one for myself if I wasn't commissioned to do it.

The casting is big, the components are big, the stupidity is big. The only complaint (though it s big one) I have about this model is the way the components have been cast and the materials selection. There are 3 materials, resin, pewter/whitemetal, and restic. The breackdown of how the parts have been chosen for each piece baffles me. If you have the technology for resin, do it all in resin.

All the extremities are metal (the hooks on the wings, the face/head, the spines on the back, and the tail. This is madness. The last 4 inches of the tail are metal, and are supposed to hang unsupported from the base of the resin tail section.

Apart from that annoyance, the model was almost flawlessly cast, with only one minor and one major mold slip, and both easily corrected, less then 10 total airbubbles, again easily fixed.

After washing the resin and greenstuffing the areas where the components mated I commenced with painting, using vallejo airbrush primer for the first time, it goes on like a dream, so smooth, good adhesion, and can even be done at night in the cold and damp with no threat of bubbling or roughness.

The scheme was not chosen by me being a commission, but I'm still reasonably happy with how the sons of horus green translated to the everblight. 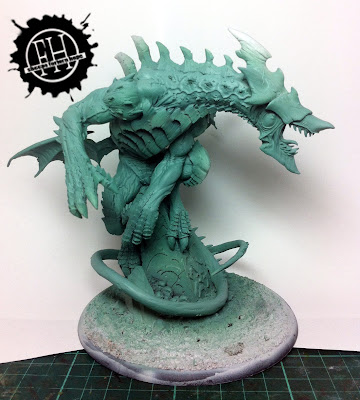 I added some red glazes to the wings for interest, and blended them back into the flesh with highlights and a pass or two of the airbrush. The wings are also magnetised for ease of transport and storage, which is why they don't quite marry up to the shoulders.

As a last point of interest I added some OSL from the soul fire the Everblight dragon spawn breathe. It added a nice spot colour too and stopped the scheme from being too boring. 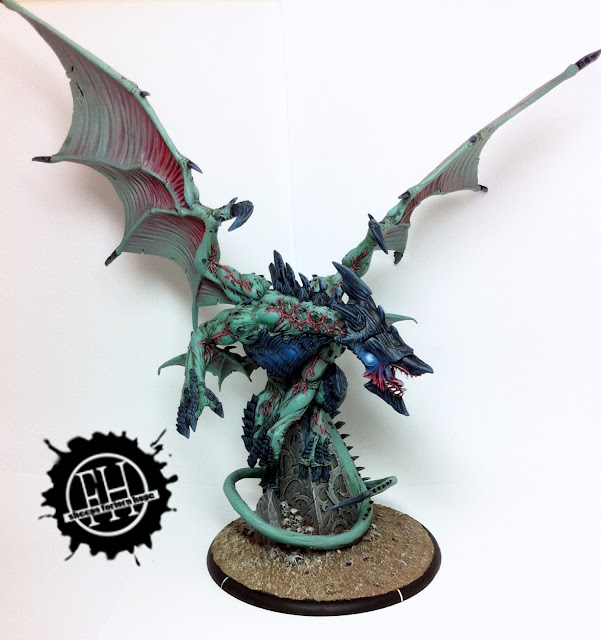 The base was left plain so the client can add his recipe for snow to keep it consistent with the rest of his collection.

Finally an almost identical shot, but showing the scale of the finished beast. 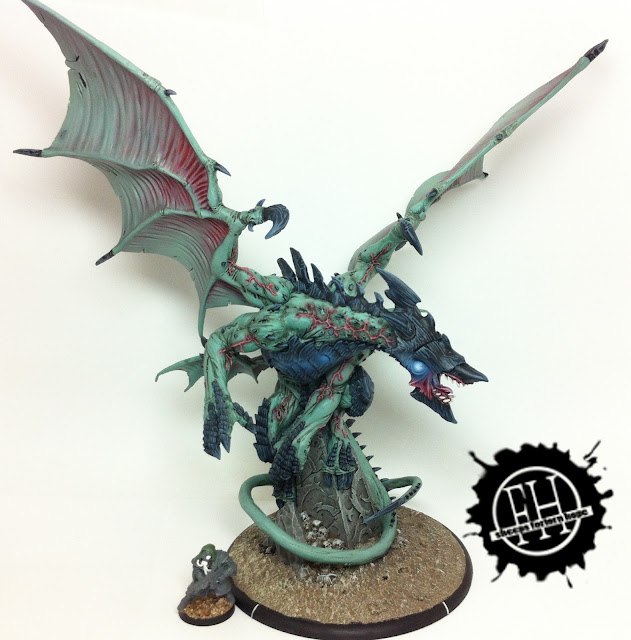 Thanks for looking. Hope you like it and found my ramblings entertaining.

Please let me know what you think.

So in between studying and playing the good boyfriend, I've managed to compete in a tournament over the last weekend, where despite my massively hung over state on the Sunday I managed to pull a respectable 5th, and won best painted with the nids. The gift voucher went towards fodder for the Ad Mech, more specifically a plastic cairn wraith, and a box of flagellants.

And from that, and a dip in the bitz box I made my first Magos.

One of the features I'm most happy with is the gun on the end of the mechandrite on the models left, it looks suitably Mech-y to me, that strange mix of hi-tech and archaic that suits the Ad Mech so well. The stubber/support las and target in the groin mount are magnetised, so when I figure out the actual rules I'm using I can customise him for WYSIWYG tournament play. 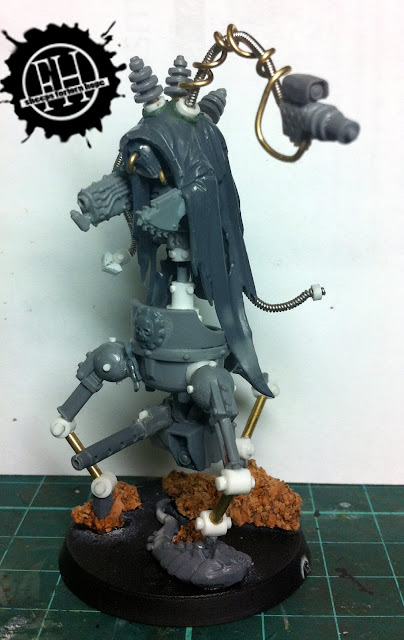 I'm really happy with the design, I think the legs could have been better, next time I will vary their lengths more, and make them fit the base, not the base fit them. 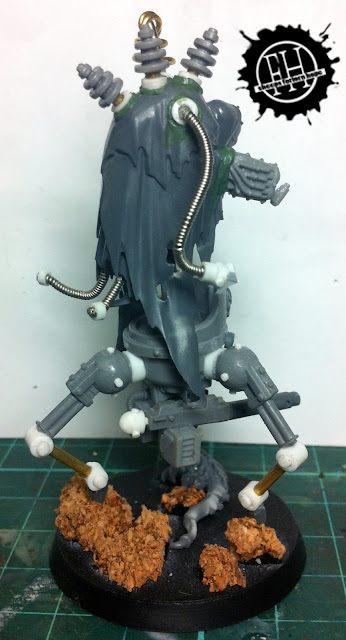 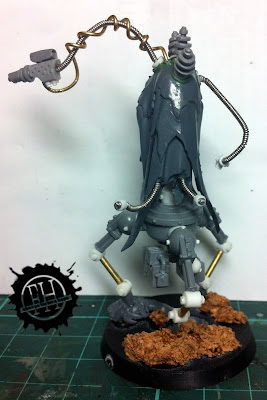 Thanks for looking, let me know what you think.
Posted by Sheep at 00:34 3 comments: