Well its been a while. Things have slowed down due to the start of the uni year and the running around that is involved in that, I'm expecting it to be a very slow year of hobby until the holidays because of the amount of time I'll have to put into my degree.

However, I have some more progress to show:

Firstly, the model that I am most happy with so far, Bannerman "TBD": 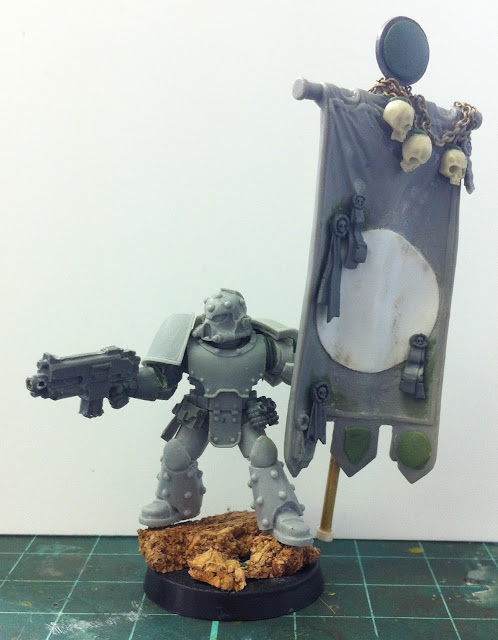 Continuing the mixing of the Mks of armour, I also added one of the FW bionic arms from the character upgrade set they released. The banner is the standard from the SM command squad, with various purity seals which I have used to cover up an abortive attempt at damaging the standard. 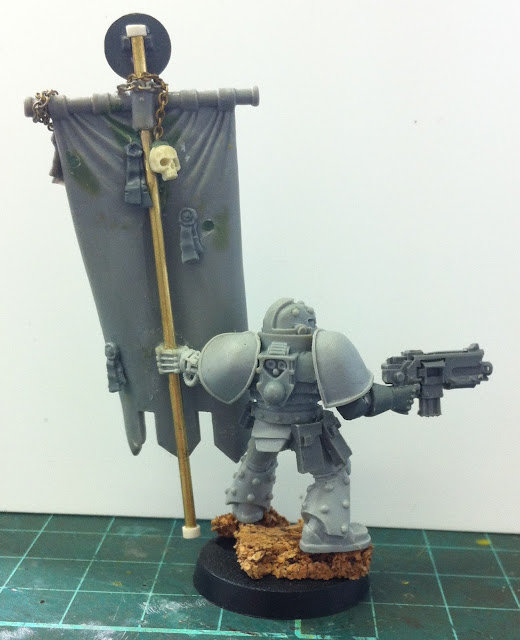 Betrayal say the Sons used to gild the skulls of worthy opponents, this is the first time I have added skulls to a model in the SoH force, though they should be making more of an appearance from now on.

Secondly, a Sgt for the new squad, armed identically to the previous one, he does however have a bionic arm. 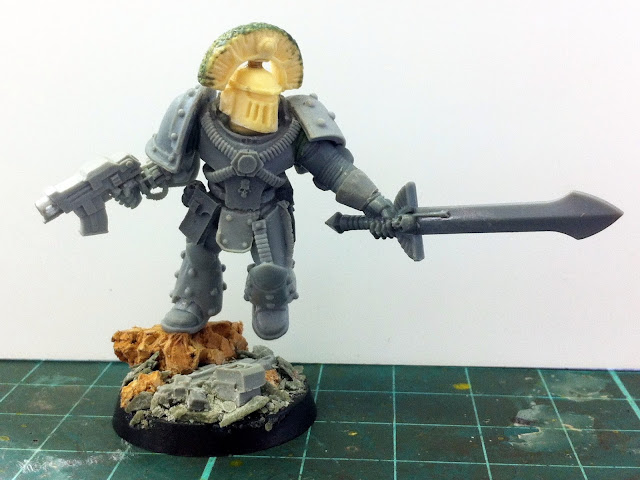 Next we have some troopers, one of which will have a plasma gun. 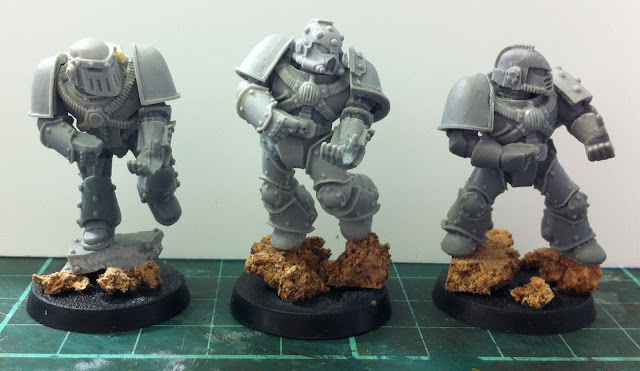 And finally we come to something different, I have been trying to figure out how to make my assault marines stand out, and didn't want to go with the named company of black armoured marines. So I decided that my assault marines will be a unit of World Eaters seconded to the Sons, or simply picked up in the heat of battle. In this way I can explain why they just get thrown out in the thick of the fighting, with no regards to casualties (I'm pretty terrible at keeping assault units alive) as the SoH commander simply doesn't care. 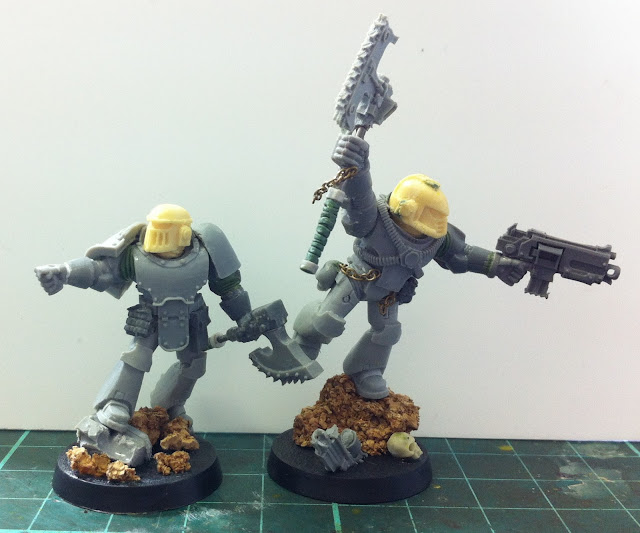 I need to buy some more of the FW chainaxes, and maybe one of the new sets with the pistols before I can finish this squad.

Today I've been playing with a model my boi, John from The Painting Bunker gave me after he won it in a charity auction for Legacy, a charity here in Australia that supports the widows and children of ADF service members who have tragically died.

It, for anyone who doesn't know, is a Sha'tari Jaguar, a faction in a 10mm Sci-fi game called Drop Zone Commander invented and produced last year by Hawk wargames. Initially I was really excited for this game and John and I had many discussions about it, and how cool the models were.

Unfortunately at release I wasn't able to get any, and my interest waned while I got into 30k.

When John showed me this model I was struck by the lines and the eldar-esqe design philosophy. Then he said I could have it as long as I painted it and blogged it. So here we are. 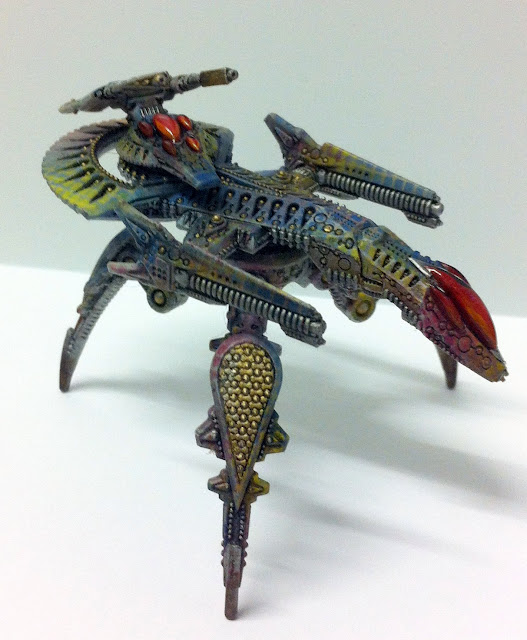 Much has been made by the creators of this game about their resin technology, and its superiority to any other resin on the market. Unfortunately I seem to have been given a dud. Whilst it wasn't as bad as the worst finecast I have ever seen, it would be about average for that troubled product. 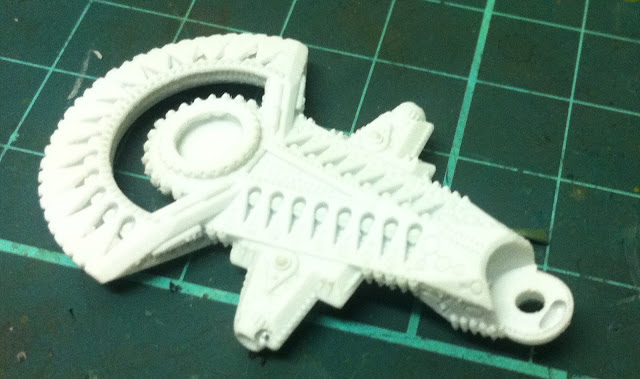 There were several air bubbles, and miscast pieces, in one case along the back of the model I had to carve out the triangle depression that should have been there. This did however demonstrate to me the quality of the resin when cut, it cuts beautifully, again similarly to finecast. Where this is superior to finecast is in its elastic qualities, I've dropped this thing from considerable height and its bounced, without breaking a single leg or weapon.

It also drilled really well, taking magnets for the turret and the waist of the walker incredibly well. 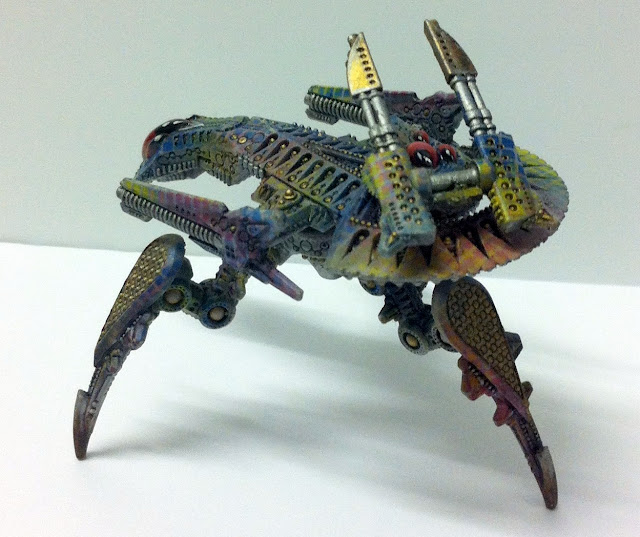 To paint it, I tried a technique using masks. In this case a series of pieces of flyscreen, which is a plastic mesh put over windows to keep bug out.

I primed the model with Tamiya grey surface primer, then laid the screen over the area I wanted colour and sprayed through the screen leaving the impression of grey lines. I did this with a Purple/pink, then enchanted blue, then yellow.

I then sprayed the bottom white, using the screen to leave the grey lines for interest. The rest was brush work, using golds and silvers from GW, before gloss varnishing and oils, then dullcote to protect the finish and stop the oils rubbing off. 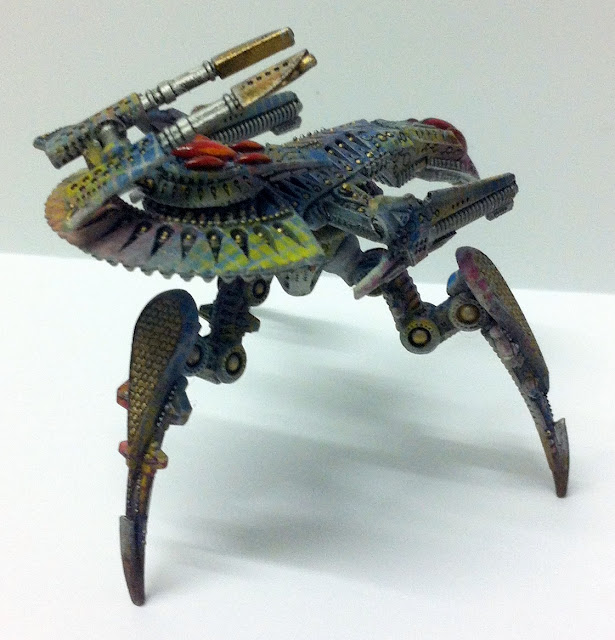 Finally just a shot to show the scale of the model. 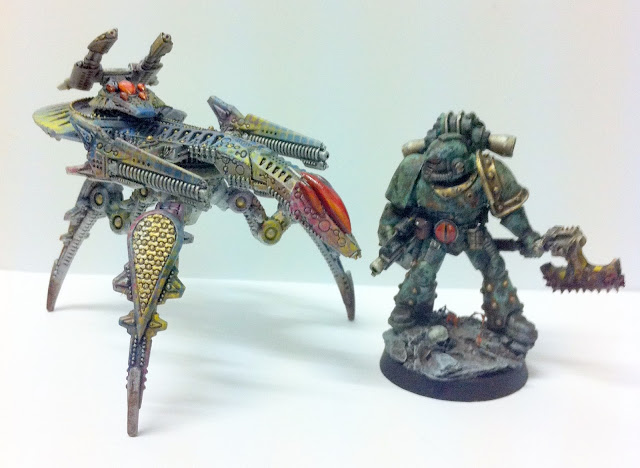 Overall I would give this model a 3.5 out of 5, the detail is crisp and easy to paint, the design is cool and different, and the material is easy to work with.