So it happened again, another project restarted, Adeptus Mechanicus.

This time I blame Matt/Rictus from recalcitrantdaze, he has secured for me some of the new Ad Mech Thallanx models, and kickstarted my brain into thinking all things red and mechanical.

Also I have to thank The Damned Artificer/Steffan, of Warseer and Horus Heresy modelling fame. He has to many cool threads on Warseer so I linked to his commissions thread. I asked for some help, and he furnished me with an amazing new water mark, something I could not have developed myself. Unfortunately it has become necessary to water mark my pics because they were used without my permission or credit by another blog, which I won't mention because he doesn't deserve more traffic.

Enough house keeping on to the pics:


The basis for all these conversions are the cultists from the "new" Dark Vengeance set. I bought a set just because on release, and have since bought another set of just the cultists from Matt. This means I have 40 bodies to turn in Cultists of the Ommnisah.

The idea behind these models is that they are the workers of the Mechanicum, pressed into service as my tyranid hive fleet invades the forge world and the whole planet is militarised to repel the invaders. As such, they will be heavily converted, and based to fit the tyranids too. The sparse foilage and the toxic looking sand I think fits the fluff, as the tyranids try to take over the ecosystem and push the biology to its maximum, but the poisons and polution mean that there is very little to actually grow.

I have also bought several sets of the old OOP FW spore chimneys to populate the eventual table with, and COD buildings and tanks to ruin as well.

Eventually I will produce more Praetorians, Skitarri vehicles and tech adepts to fill out the list, but ATM this is simply a modelling exercise that's gotten out of hand in my mind.
I have made a promise to myself that I will make a minimum of 2 troops choices before I start on the "cool" stuff, but we all know how long that will probably last once the Thallanx arrives.
Posted by Sheep at 17:21 7 comments:

Hey everyone, this guy took a little longer than I thought he would, but he's finished!

I'm quite happy with how the devourers came out. The pink to purple gradient I usually have on my guns didn't quite work out because of the amount of "flesh". To add some more colour and interest to the them, I added some glazes of red and purple. 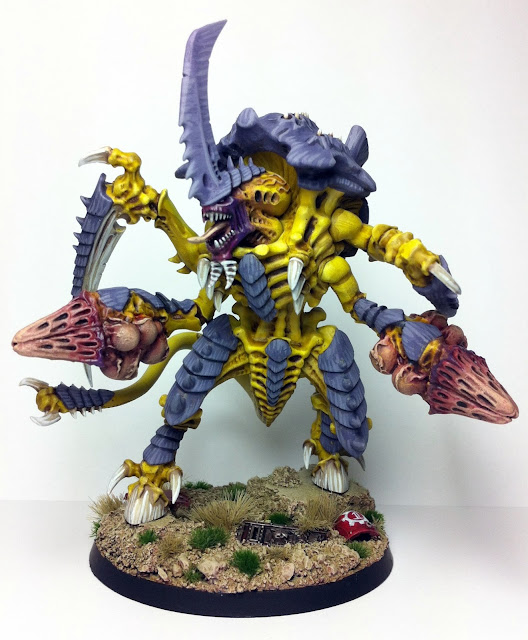 I seem to find myself easily distracted by hobby projects, as the amount of bouncing between ongoing projects can attest.

Now I've been distracted from finishing the heirophant by another tyranid gribbly. This time its an Armoured shell Hive tyrant with 2x twin linked devourers. This guy is a beast, and very hard to shift from the table top, esp if he hits the jackpot and get iron arm and lifeleech for powers, topping up wounds at toughness 7+ is just mean.

Taking the normal tyrant, I removed the front smoke stacks, and replaced them with the spiny carapace piece from the carnifex. Some surgery to the underside was required to get it to fit, but it was minor and should be self explanatory to anyone trying it themselves.

The next thing to tackle was the devourers. Now I've never been a fan of the S 6 devourers being the same size as the termagants S 4 ones, it just smacks of lazy sculpting. Also you only get one set per tyrant. Fortunately I've been collecting bugs for a while and have a stock pile of the termagant ones.

So I glued 3 of them together for each arm.


They were attached to one of the previous editions scything talons by a length of brass rod, the bulbous egg sacs/ammo were made from balls of 5 minute putty, and green stuff veins were sculpted onto them as they were blended together to form the sac.

They looked less phallic in my mind I swear.

Next update should have this bad boy either finished, or well on his way.

I also have a couple of commissions in the wings, so expect more A.D.D in the future.

Hi everyone, sorry for the scarcity of posts recently, but uni has been brutal!

That aside i have managed to pick up a brush in my mid semester break. Many moons ago I was given a Tyranid heirophant at a song. it was a little worse for wear, and a bit bandy legged from being left in a car during an Australian summer, but after a Jesus like resurrection I can show you a PIP. 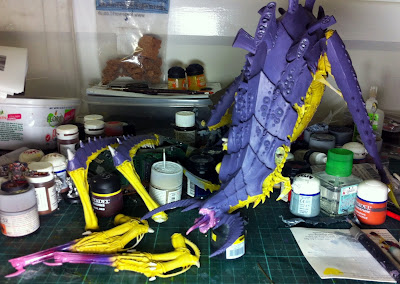 Not much of a pic, but as a proof of life I think it will suffice.

During my attempt at dis-assembly, the shoulders of both right arms, one for claw, and a couple of spikes snapped off. Most were minor fixes, though I had to get alittle bit creative with the basing to make the claw work (and even then I'm not 100% on it). Rumors of Apoc II has set me painting this guy, and I hope to crush Johns Imperial guard with him at the soonest opportunity.
Posted by Sheep at 17:41 2 comments: