Just a quick pic to show that work is continuing on the SoH.

I added a secondary plasticard layer to the front of the sling to add some detail to an area that I though was looking more like a beauty pageant contestants sash then a sling. 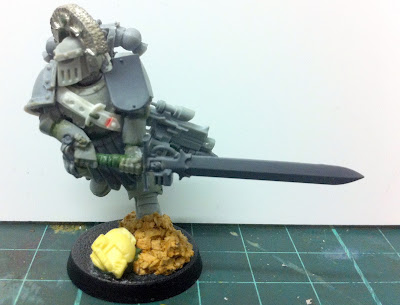 Before anyone (Matt) asks how it works, I have no idea, its just for looks.

The only conceivable problem (besides the functionality) I have with this design, is the size of the buckle. I may cut it off, and redo it in pure GS. The only thing stopping me is that I used polycement to glue it down, and a buckle would need to be robust enough to be manipulated by someone wearing power armour gloves.

These are the thoughts that keep me up at night. Any input from the brains trust?
Posted by Sheep at 23:23 5 comments:

Since finishing the spartan its been nice basking in the afterglow of the internets, but progress must continue, and the sons need someone to lead them.

I want to do a terminator heavy force, and to get them to count as troops in normal games of 40k, I need deathwing, or wolf guard. I've already done a wolfguard army, and Dark Angels just got a new book. So DAs it is. I'll obviously do a Belial conversion later (maybe a counts as Abbadon? Maybe I should do it soon, so I can be the first guy?) but Azreal seems like the most versatile choice, since he unlocks both ravenwing (jetbikes?) and deathwing.

But I also want the army to be able to be folded into any codex that catches my fancy. Ie Chaos. So some for though will have to be put into construction of the terminators so that they can cross codexes easily.

Anyway, enough dribbling from my brain. Onto the pics. 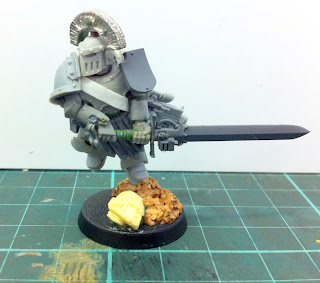 Continuing the theme of mixing armour mk's, the legs arms and left shoulder are mk4, the torso head and right shoulder are mk3. The little kilt, from the SM command sprue I think, is a nod to the Catphraci  terminators, and will be painted in a dark red. The left hand is plastic, whilst the right is resin, and in some kind of weird FW/GW disparity, they are completely different sizes. I didn't realise this before I glued them to the sword hilt. Obviously I will run him as a Preator with Paragon blade (GL terminator force sword) in 30k, cause that's what everyone else seems too. 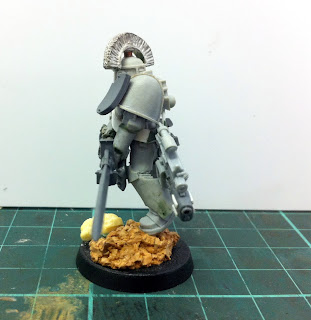 This angle shows the flow of the pose a bit better, I was trying to capture a mid-underhand swing, and the momentum affecting the slung combi bolter. He has been pinned numerous (9) times, with one in each shoulder, elbow, wrist hand/sword (one piece of 1.6mm brass rod), right knee and left foot. 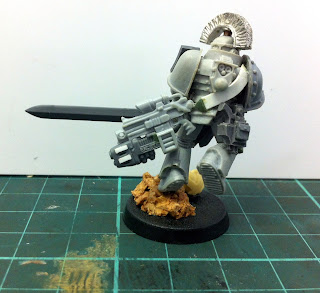 This show the sling and the swing on the bolter a bit better, I tried to 30k up the plasma gun a bit, whilst still retaining the mastercrafted look. Some of the back pack mounting had to be removed to aid the flow of the sling, but its covered anyway, if its too noticeable I'll resculpt it before priming. For tournament WYSIWYG purposes he also has a bolt pistol, frag and krak to cover almost any load out. The little shield can count as a refractor field. I also added a pouch to the holster of the Bolt pistol, to cover up the ugly nothingness of the design.

I actually quite enjoyed putting this guys together, and as the first character I wanted to make him stand out. I'm thinking a white helmet, red plume as a nod to this guy being a terran luna wolf veteran, I will ofcourse make up some fluff to explain away why he wasn't purged on Istvaan 3.

Thanks for looking, anything you have to contribute to the list, ideas on paint, or what you think I did wrong I'd love to hear them.

I've been working pretty constantly on this, and I have to say, I'm in love. It may have been a dog to put together, but shes a beauty queen now. A battered and chipped one.

I incorporated a piece of iconography from the Horus Heresy Betrayal book, the one that looks like an upside down sunrise. According to the book this was displayed by some of the elite formations of the SoH, and considering the rarity and tactical nature of the Spartan I thought it was appropriate. 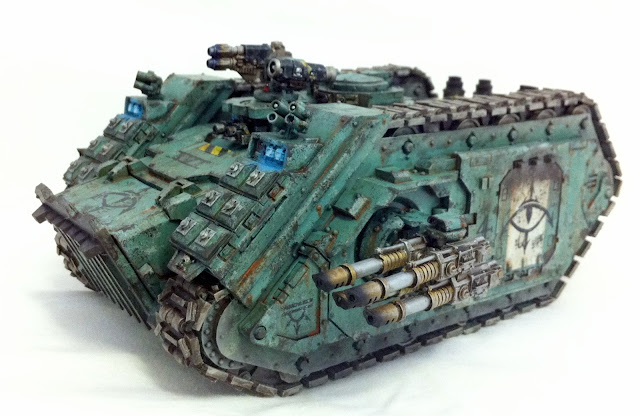 I tried the technique of Object source lighting (OSL) for the first time of this model too. I used blue to compliment the power sword colour I had already used on the Sgt previously. 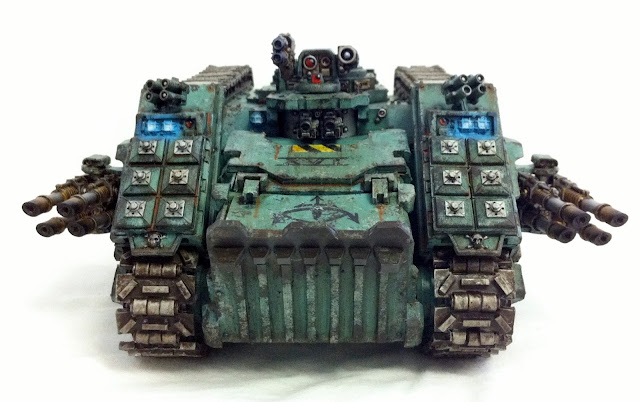 The side shot show the makings I put on the doors, Unfortunately the XVI numerals I painted at the top of the door were covered by the mud. Freehanding all the symbols and numbers is a real pain in the ass, but the silver lining is not having to worry about decal film . 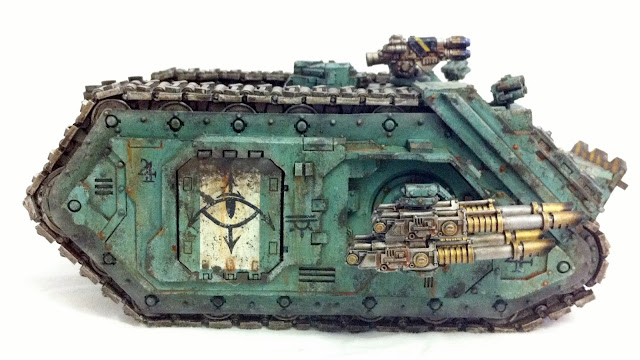 Rear shot, I just love the size of this power plant  I'm also really happy with the treads, adding the strips may have been a ball ache but it has improved the character of the tracks immeasurably IMHO. 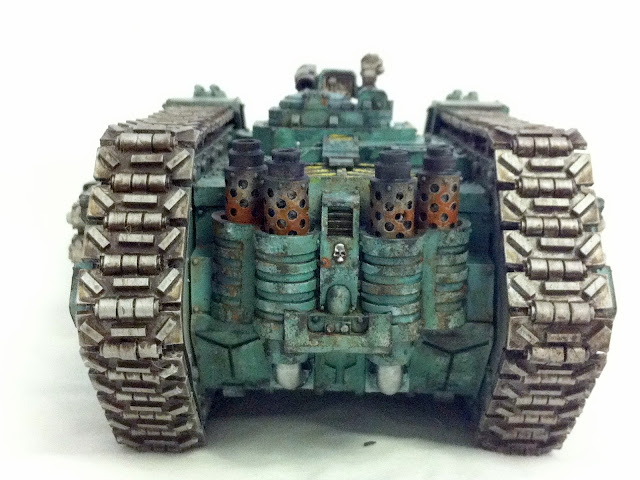 Top down shot, showing off the hazard stripe. The justification for the amount of stripes on the engine grill is to warn dopey marine crew wearing a tonne and a half of armour not to step on the grilles. 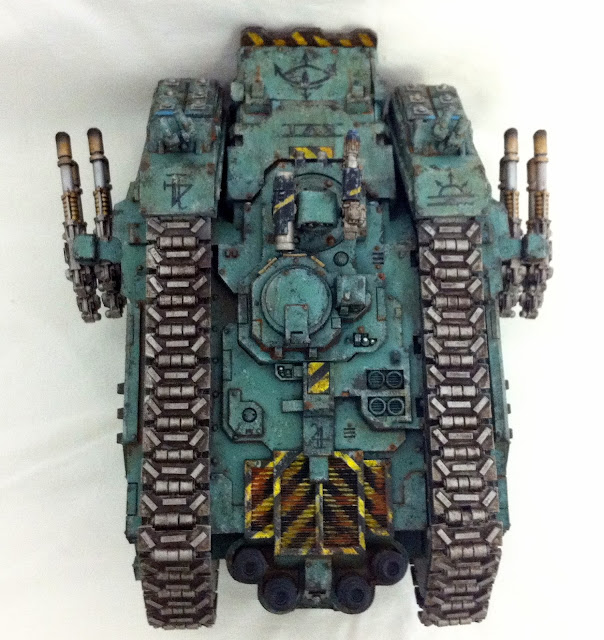 Finally a scale shot, this is one big mamma jamma. 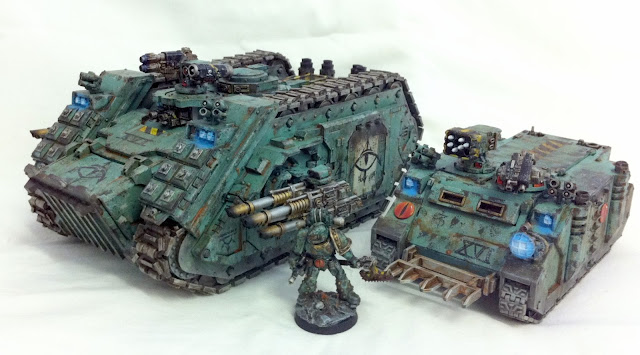 I promised some pics of the WIP Sons of Horus, and I'm delivering.

Recently I was hanging out at my mate Johns place, and seeing the amazing work hes put into his FW city fight tiles (seen here @ The Painting Bunker) has spurred me on to start the sons again.

Now I've always been one of those people that eats desert before the main meal, and I tend to get carried away. So when the opportunity came up to buy a spartan I didn't even blink.

This thing is a beast. However the instructions, unlike most FW products, are lacking in the details. This lead to a colossal fuck up on my part and I glued two section of track on the wrong way round. The lesson here people is to always dry fit you expensive FW models before committing glue to resin.

One thing I cant stand about the design of these Pre heresy heavy tank models is the tracks. There is no conceivable way that those things generate enough traction to move something that is supposed to weigh in excess of 100 tonnes. 240 pieces and 2.5 feet of 1.5x1.5mm plastic stripe later I had tracks that even if they might not actually work, at least look to me like they would.

After several choice words, a walk around the house to calm down, and a failed attempt to break the bonded pieces off (resulting only in snapped track sections), I came up with idea of adding track guards and assault launchers to cover up my mistake. 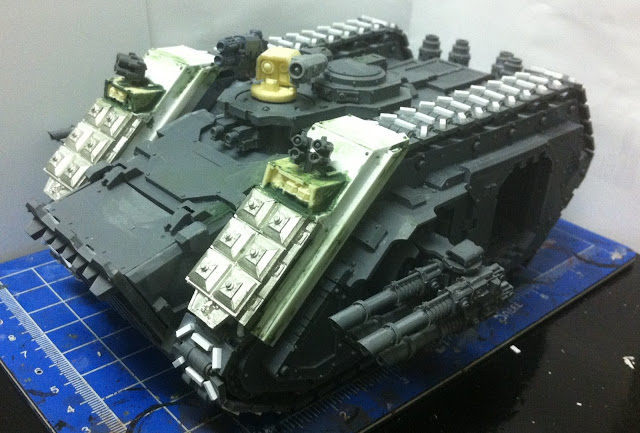 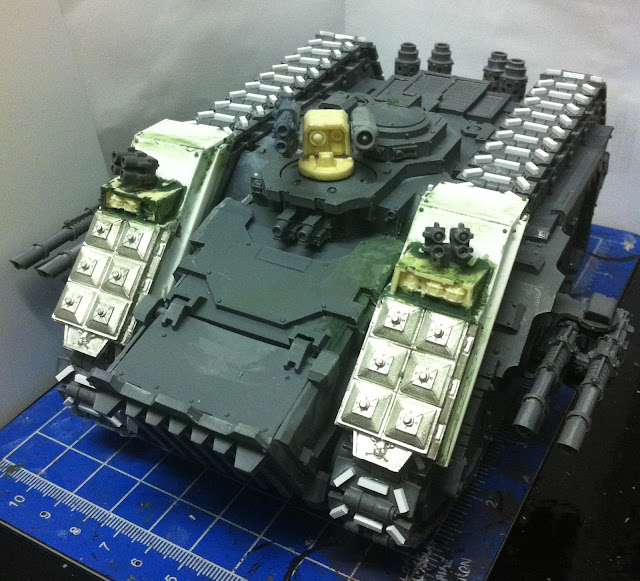 Now I've done it I wouldn't have it any other way. I think it just looks so tough. Like a M1A2 Abrams with the full TUSK upgrade. In that vein, I scratched up one of the command frames from apoc that came with my emperors fist tank company, and stole the SM sensor suite to make a remote weapons unit. I mounted the Hunter killer and a multimelta from the FW Pre-heresy heavy weapons pack onto it.
This was then magnetised into the top plate for the heavy bolters. 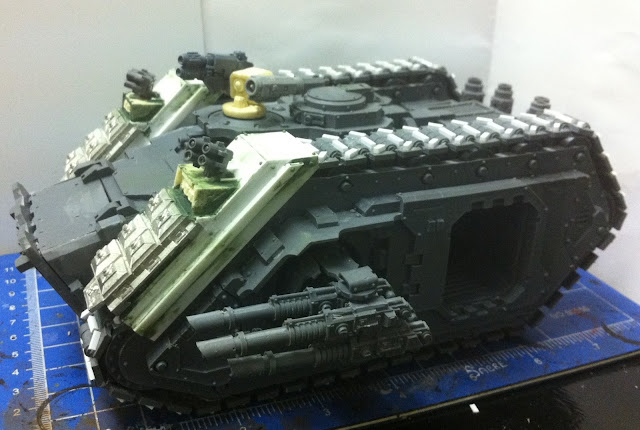 I should also mention that I magnetised Quad lasers, and their mounts for ease of transport and pose ability. An interesting thing to note is that 2x 3mm/1mm magnets fit perfectly in the holes the lascannons are supposed to mount too. I had to get alittle more creative with the sponson mounts.

All in all I cant wait to paint this beast, and expect to have it finished soon.

I should also post this, because it boggles the mind. 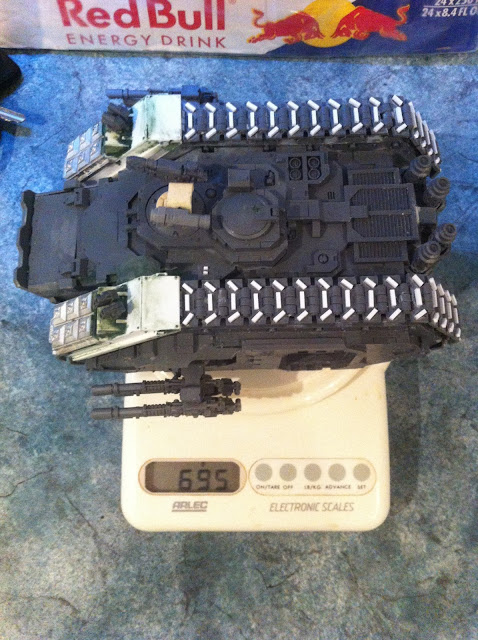 Almost 3/4 of a kilo, or a pound and a half to my American friends. Heavy support indeed!

Hi everybody, and welcome to all the new followers, thanks for persevering.

So, 6 weeks and what do I have to show for it? Well besides the new scars on my ankle from the op, and a FW sized hole in my bank account from a weak will and too much time on the net recuperating, not as much painting as I had originally hoped got done.

However that motivator of the century that keeps kicking me in the pants reared its ugly head and I painted some more Nids for a recent no comp tournament at my local (read 200km away) GW battle bunker. Being no comp, and being Nids, I needed some more units to harden up my otherwise spammy list.

To that end I finished painting these guys:

Firstly, something that can be truly terrifying (especially if you and your opponent dont read the rules about toxin sacs only working in close combat til turn 4) in 6th ed, the notorious Flyrant. Twinlinked devs with brainleech will ruin alot of peoples days, casting iron arm on him and plopping down in front of the enemy is fun too. 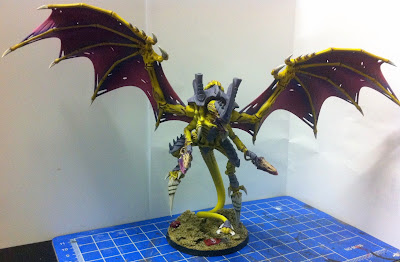 This shot gives a much better view of the wings, which i obviously did with the airbrush. I'm quite happy with the effect and gives a very striking combination of colours I think. 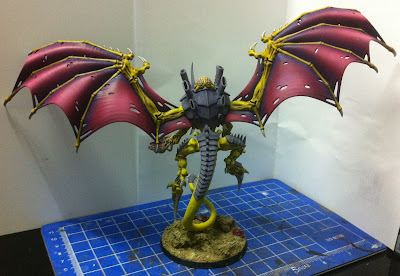 Next, the bully of the list, Swarmlord and his two offsiders (tyrant guard), with the right combination of biomancy powers this guy is nigh on unstoppable. Stacking enfeeble on a unit of thunderhammer terminators making them S2(4)/T2 has to be the highlight of my tournament with this guy. 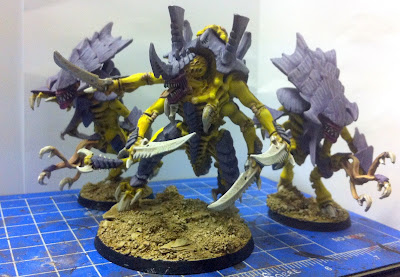 Thirdly, a Trygon Prime. Bane of artillery, transports and devastator units the world over. Luckily enough when he isn't mishapping His 12 S5 shots make him worth taking despite his landraider sized price tag.
This is the FW version, which I bought for a themed apoc game about 4 years ago, hes been languishing in a box ever since, a prime and a lick of paint and he has a new lease on life in my Godzilla Mk II list. 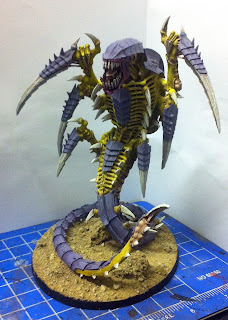 This has been painted for ages, but its the last model to be photographed individually from my original Nid list from 8 months ago. Happy now Matt? 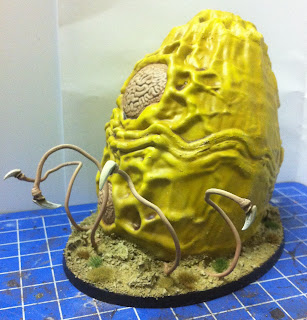 Thanks for looking and I'll have a Sons shaped update for you all as soon as I edit the pics to be slightly less terrible.
Posted by Sheep at 00:09 1 comment: