End is in sight!

Back again with more completed models, and tales of woe.

The eventual goal of this army has always been Adepticon, however I played in a "local" (QM IV - 200ish kms away) tournament 2 weekends ago, and I've always said I would love to take a new painted army to each of them if I won best painted. So in my hubris I submitted the BA list thinking it'd motivate me to finish. It didn't :(

But I still came 20th out of 54, a result I'm fairly happy with considering the complete lack of scoring units in a tournament with 4 objective based missions!

I find my painting mojo is either completely sapped or recharged by these events, unfortunately it was the former this time, and since the last update all I've managed to achieve is finishing the pods and the last 2 dreads.

The last 2 dreads are the "alpha strike" component of the list, dropping in and neutralizing  what ever the greatest armoured threat is on the table, well thats the plan.

It worked properly twice in 5 games, one game the 1st turn pod earnt me a landraider kill, and another game I got a predator by dragging it into combat with me, and using its wreckage as cover for my opponents shooting phase :D

Now I just have to finish the infantry and I can move onto painting something for fun, or profit. Or both if I paint an eBay experiment paladin list.

Also I'd like to pass on my thanks to all the new followers I have, you all make it feel worthwhile posting from the gaming wasteland that is my home town.
Posted by Sheep at 16:11 4 comments:

So its been a bit slow on the modelling front recently, what with the distractions of work, drinking and women, not necessarily in that order.

But I managed to force myself to assemble the first squad of 'Zerker/Death company infantry, and with 10 days to paint them all plus finish the last of the vehicles its going to be tight.

Now 6 of these blokes will be pulling double duty in my 400pt list as vanguard vets, so I still have to add a couple of stormshields to 2 of them, but they have all be magnetised ready for their raptor jumppacks to be added.
Posted by Sheep at 08:26 2 comments:

Another 2 models closer to finishing this army. 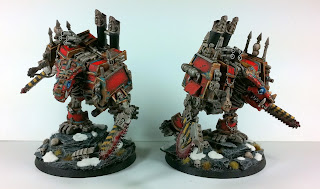 It was almost a disaster though, the store where I buy my  varnish from has been unable to restock due to a change in supplier, so I couldn't get my regular spray varnish at all. So I had to resort to "Army painter anti shine matte". Let me tell you, it does exactly what it says, but too well.

I thought photographing one of these bad boys was a pain!

I applied the finishing touches to these two this afternoon. Mostly it was just mucking around with the lense effect on the canopies. Its just a bastardized version of the effect alot of people are using on their GK power weapons.

A tip for young players, the extra 5 minutes you spend in preparation (masking, cleaning, mixing etc) will pay of 100x by the time you get to finishing. Rushing simply ruins things. I learnt the hard way, going from this:

Notice the bleeding, splatters and peeling, all caused by shoddy prep. The masking tape wasn't sealed properly, the paint was too thin (and my airbrush has a splatter gremlin I can't seem to shake atm), and I should have used a white primer instead of simple acrylic to paint the white base over the varnish I'd laid over the reds.

Not the greatest, but I managed to cover up most of the blemishes and I think they came out pretty well. The only thing bothering me now is that the reflection/lines aren't parallel, but this is because I was trying to cover as many of the random splotches of paint with the fewest lines, and its something I can live with.

I'm really happy overall with how these things turned out, they are the biggest models I have to paint for this army, so its definitely a relief to get them out of the way.

So today is an exciting day in the young life of this blog. Through some careful editing and patience on the part of Ron, my humble little blog has been added to the monolith of GW/modeling blogs that is FTW.

Thanks Ron, and I hope I don't disappoint your faith in my ability not to swear ;)

Secondly, the next tournament I will be attending Quarter Master IV on the 26 - 27th of November, is fast approaching, I love these tournaments, great company terrain and good games, however I have made a promise to myself that everytime I win best painted or players choice I will play a new army at the next one. 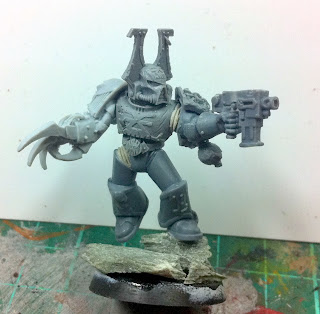 This bloke will be pulling double duty in the khorne lists I take to Adepticon, in the 1850 point list he'll just be a DC dude (maybe with a power fist), and in the 400pt list he'll be a vanguard vet Sgt with lightning claw.

This ones for you Matt.

So I sorted some average pictures for the storm raven, not sure whether to be disappointed or excited that my iPhone takes better pictures then my camera ever did.

The windscreen glass still needs to be finished, but I'll do both of them at the same time because I think I'll try an airbrush effect on them, I just need to read up on which one yet.

And a couple of close ups of the doors.

Here are the pics of the dreads, and dread pods I said I'd put up. I still haven't started the infantry for this army, which is a bad thing because I have a month to finish the army now, but good because I changed the list a touch.

Any way the pics:

The dread pods, I converted these alittle bit to look more like the dreadclaw pods from FW. All I had to do was invert the fins, and clip a little bit of plastic off of what is not the bottom, where the engine would normally sit. Then using plasticard I made a plate for the roof to mount the engine, and made chaos stars out of strip.

Next is a group shot of the dreads assembled with all their arms attached. I am still waiting on some chain to be delivered from eBay to complete the 2 magna grappl/fist arms.

I have actually completed one of the storm ravens, however it is being an absolute pain to photograph, so once I figure out how to solve that I'll put up some pics.
Posted by Sheep at 17:27 2 comments:

Hello one and all to my humble blog. As has been said in the description, I've been modelling and painting GW products for along time, 16 years.

During that time I've completed several armies for my self and others. The largest of which would be my Death Korps of Krieg, taking just over 5 years of on and off painting to complete it tops out at just under 5500 points.

Painting this army has taught me alot about weathering, and also how to paint to a good standard quickly, with much of the infantry painted in one month blocks.

Now I'm planning my first overseas trip next year to coincide with Adepticon, Chicago USA, in April. and I want new army that  think will represent where I think I am as a hobbyist atm. To that end I'm painting a counts as army of blood angels. Counts as lists are a tricky topic some times, especially in the US tournament scheme. So to that end everything in the army will be converted and painted to the highest standard, with no ambiguity of armament or miniature type.

So here's the list for my Khorne angels, Khorne models using the Blood angels rules. A conscious choice because A: the rules fit better then the abortion of a codex that is Chaos B: its a strong list with some interesting builds. I may accused of playing a WAAC list because of the strength of the components, but the list itself has zero scoring units, a huge disadvantage in the modern game.

For the Australian tournament scene I will drop the chaplain to run at 1750.

And now onto the things that everyone loves the most about modeling blogs, pics.

Firstly Astorath, this was my first finecast model, and I must say despite all the doom and gloom surrounding the product on the internet, I had no problems. The material is very soft compared to resin, and allowed me to convert much more quickly and safely then if the base model had been metal. I doubt If I could have even done the conversion if I used metal. The base model is the chaos raptor champion, I removed the head and left shoulder pad, replacing them with FW components from the khorne berzerker and khorne terminator upgrade kits.

Next are the stormravens, a combination of the terrible kit from GW, a missed opportunity on their part, it just needed to be a little longer in the fuselage to stop it looking like a caricature of an aircraft, dubbed the chibi hawk by the forums, fortunately chapterhouse studios have released an upgrade kit that fixes these short comings.

Thats enough for one post I think, next up is the dreads and pods, but if anyones made it here with out prior knowledge of my logs on Warseer and Ammobunker, more pics can be found there.