Aliens Vs Predator: The minatures game

Ok guys, so today is a bit of a departure from the norm as this is a primarily 40k-centric blog, but recently I was made aware of the Kickstarter for the official licensed AvP miniatures game by Prodos games.

I don't know about you guys, but my love of this franchise predates even my introduction to 40k, and is probably one of the  reasons for my continued return to Tyranid armies.

After convincing a bunch of mates (6 at last count I think) to commit to backing the kickstarter I have been bitten by the inspiration bug. Since I can't buy, convert or paint any of the minis for this game yet, that leaves me with terrain.

I quickly scoured ebay for AvP related things, and ended up buying some cheap predator halloween masks. Which lead to this sketch:

After that I though about iconic terrain from the franchise, clearly there would be jungle, so I would set my terrain in an alien jungle environment, but there needed to be more. Pyramids:

A simple stepped pyramid would look great, block LOS and be useful and playable, but I needed it to reflect the universe, so I began sculpting panels to use as relief on the sides of the pyramid. The panels ended up being 45mm square.

I started with a styilised predator (or Yautja as they are apparently called in the fluff) mask, the writing is from a predator language translator I found in the comments on kickstarter and is apparently the one the Prodos guys have used.


The border says "The hunt begins". Which I thought was apt for the predators and is the name of the game after all :)

I couldn't just have a border of all pred masks, it would look a bit repetitive, and according to the movies and the xenopedia article on yautja they like to decorate their cities with alien statues and fresco's.

This is the result, a queen chestburster, in the classic Aliens 3 poster pose.


The text on the border of this panel says "Death serpents".

And this is where I'm up to currently, once I have cast the panels a million time to get enough for a pyramid, I can begin construction and will have another update later.
Posted by Sheep at 11:49 2 comments:

So the rumour mill is rife with predictions of the impending drop of a new Nid codex, so I have gone on a bit of a painting binge to hopefully make use of the new codex straight off the bat.

My selection criteria for the new models was simple, what do I have that I haven't used. This is based on the philosophy that GW makes all the currently shit units good in the next codex.

Firstly Biovores. Not the worst unit currently, but the strength of 4 for a barrage doesn't really scare many things, I'd like to see a return to the bio-acid mines with rending, or something similar to make them useful for sniping, and scary.

Secondly, Hormogaunts. I loved these guys in 4th, and consequently I had 60 of them in my bitz box. They can be used currently, but only at their most expensive super-gaunt mode to give them poisoned and furious charge.
I'm hoping the cost of bio-morphs comes down, or their is a buff unit like the tervigon for hormogaunts too (or an upgrade that allows tervigons to buff hormogaunts). 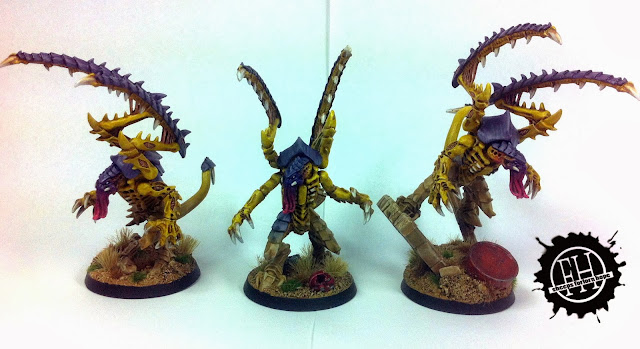 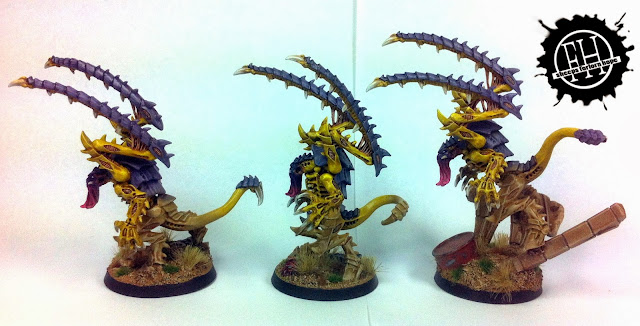 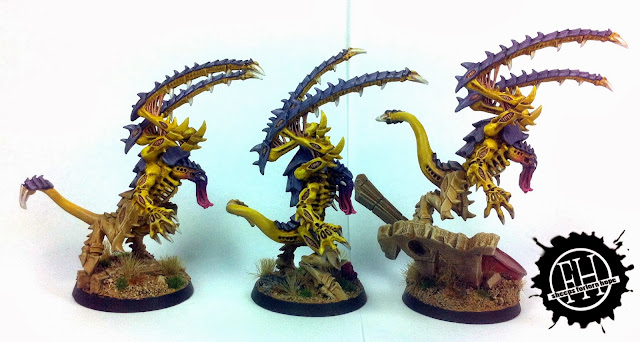 Next are the most useless models in the tyranid lineup currently. With the ability to affect reserve roles, but only if its been on the table for a turn, and you have to roll for them to come on in turn two . . .seriously underwhelming.

Giving them back the wound and attack they lost in the transition from 4th to 5th, and allowing the pheromone rule to work like SM drop pods (half you lictors rounding up come in turn 1) or some other mechanic would see these guys hit the table for me. Also 80 points is way too much, a centurion with 2+ save and a grav cannon costs similar, and will kill alot more. But I love the models and want to use them. 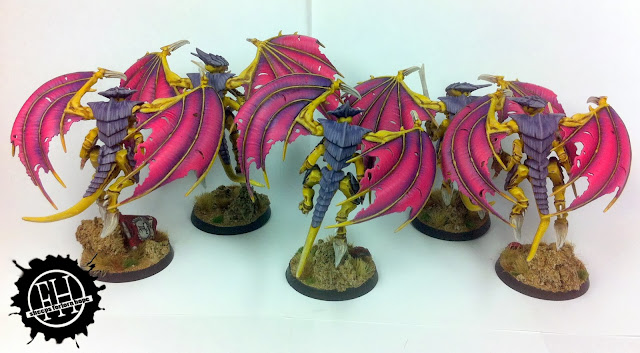 Finally, Shrikes. I used these guys in a doubles tournament on the weekend, and they were seriously impressive. Racking up a massive number of kills and generally scaring anything with more than 2 wounds. I have magnetised the arms so that I can run a different weapon if the boneswords are nerfed, or if i get around to doing lashwhips for them too.

To make shrikes seriously effective the Prime/Alpha warrior needs the option to take wings. make it a 25 point upgrade and I'll take that everyday to give them the ability to tank some wounds and give a boost of WS.

I also have the bitz to make another couple of tyrants, and another 30 Hormogaunts are in the pipeline. Plus I should really get around to painting a few more of my 180 termagants . .  . plus whatever new comes around.