Or maybe a hobby butterfly is a better description. In one of my now almost patented 90 degree turns of hobby inspiration I've been painting something completely new.

Boltaction; more specifically Fallschirmjager. these are being painted to  nice TT standard so we can get some games in at the club and learn the rules. 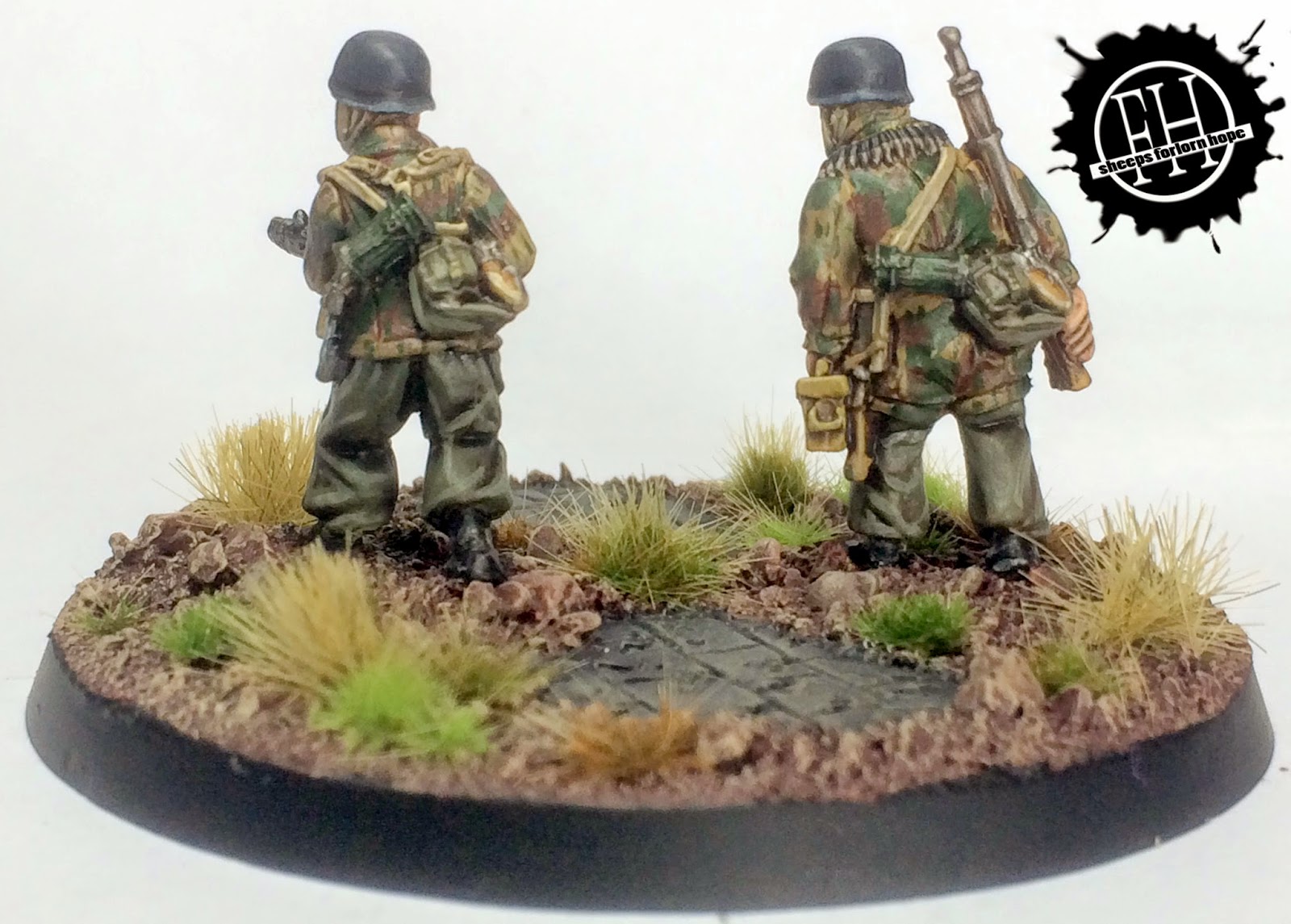 Boltaction is a game that has taken off in a big way recently in the local tournament scene, and being a slave to trends i just had to jump on board. My best mate dibbs'ed the US airborne, and being fans of Band of Brothers (who isn't) I decided to do one of their early protagonists.

The minis themselves are a really mixed bag of good and bad points: this is an initial assessment based entirely on the metals. I haven't worked with any of the plastic sets or resin tanks yet.

Good points:
Scale - everything is scaled correctly. Even if their heads and hands are slightly to big for 28mm minis they aren't the GW heroic scale.
Affordability - even paying full retail a platoon is <$60, about half the cost of the GW alternative
Poses - Each figure in the platoon box is a unique sculpt, that's 21 individuals! Something that the GW range of imperial guard regiments never had. 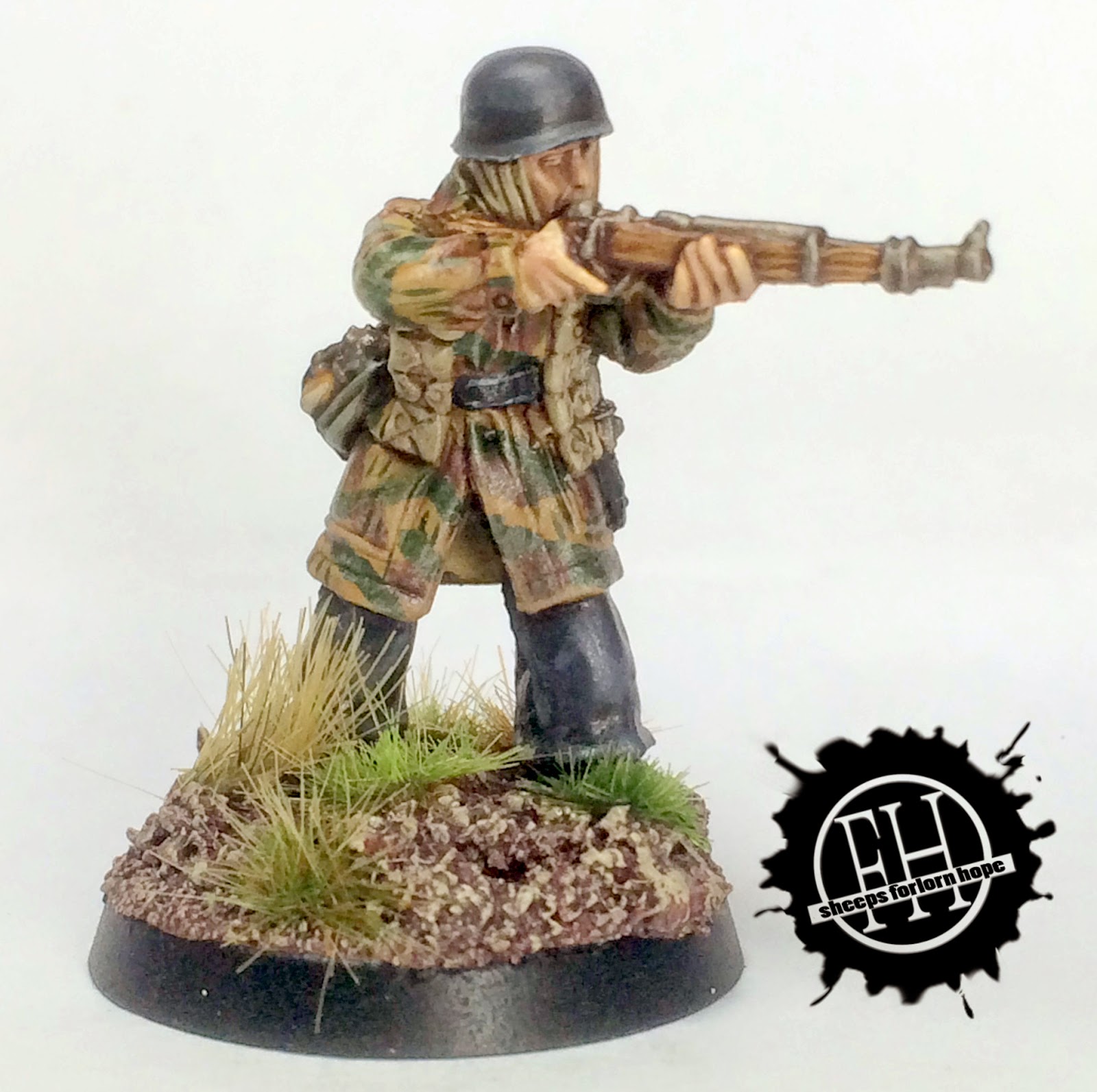 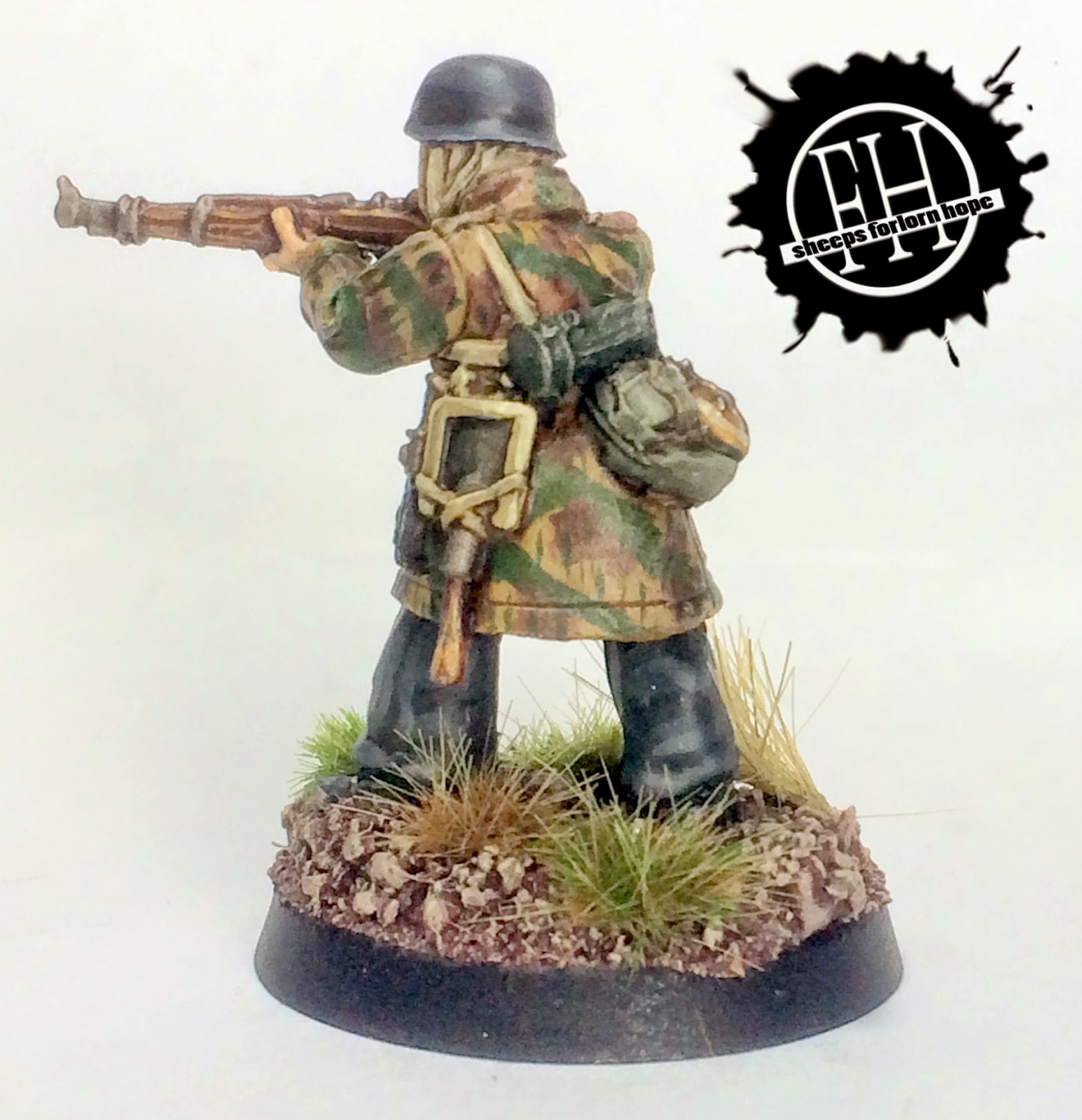 Bad points:
Basing - the platoon of metal minis doesn't come with any bases, leaving it open to interpretation as to what they should be based on. Seems I went the wrong way by basing them on GW bases, as the convention is to use the flat Rendara bases. The models also come cast on large plugs of metal, that are hard to remove. and if you don't, they end up on mounds like these guys.
Material - I hate HATE working with metal models. Moldlines are hard to remove, in awkward places, and obscure detail, and no matter how careful you are paint chips and wears from edges.
Sculpting - Fallschimjager are one of the earlier model ranges in the game, and it shows. some of the sculpting is very soft or muddy. The faces in particular are uninspiring, not helped by the fact that many moldlines cross them and removal can hurt the detail. 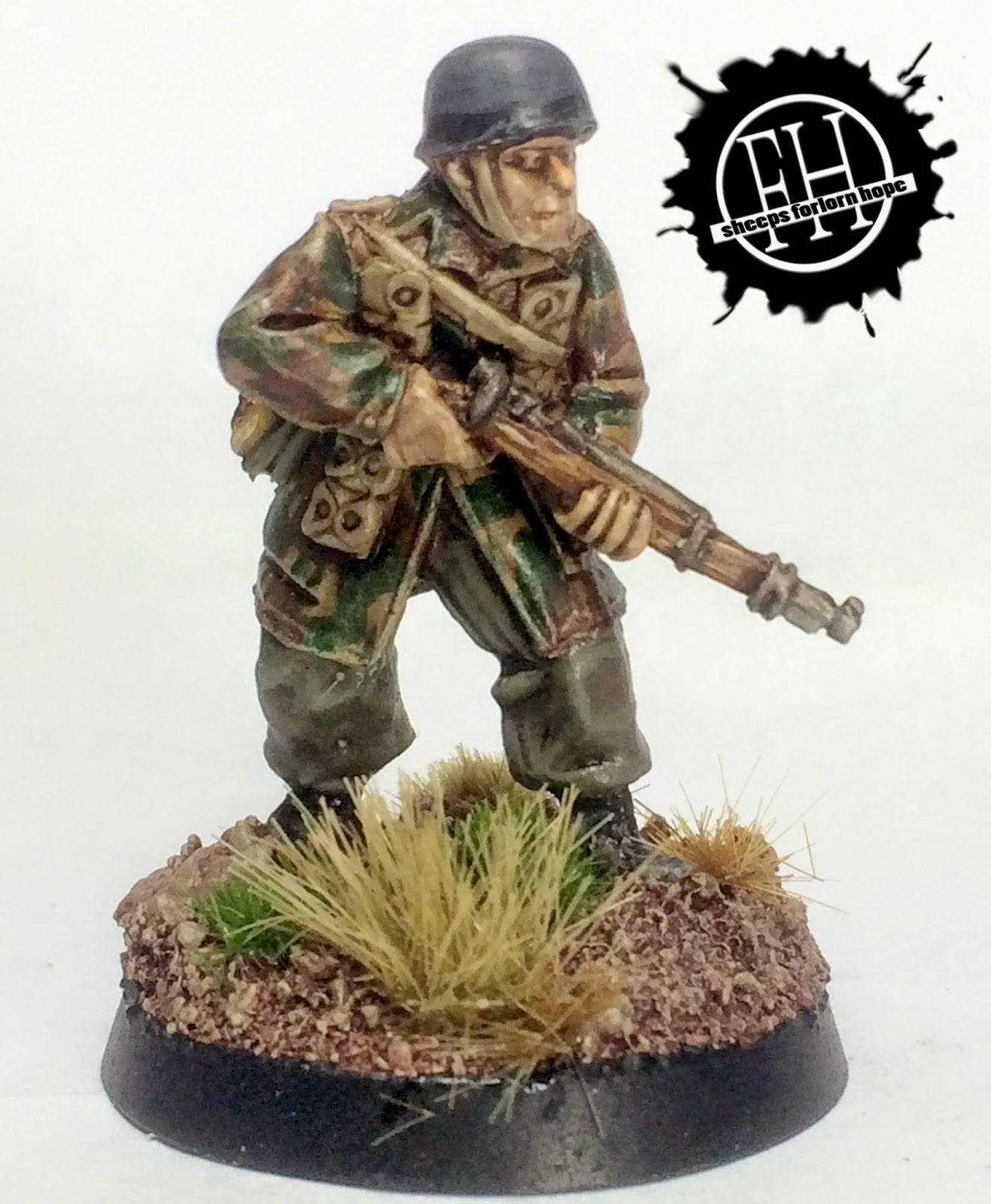 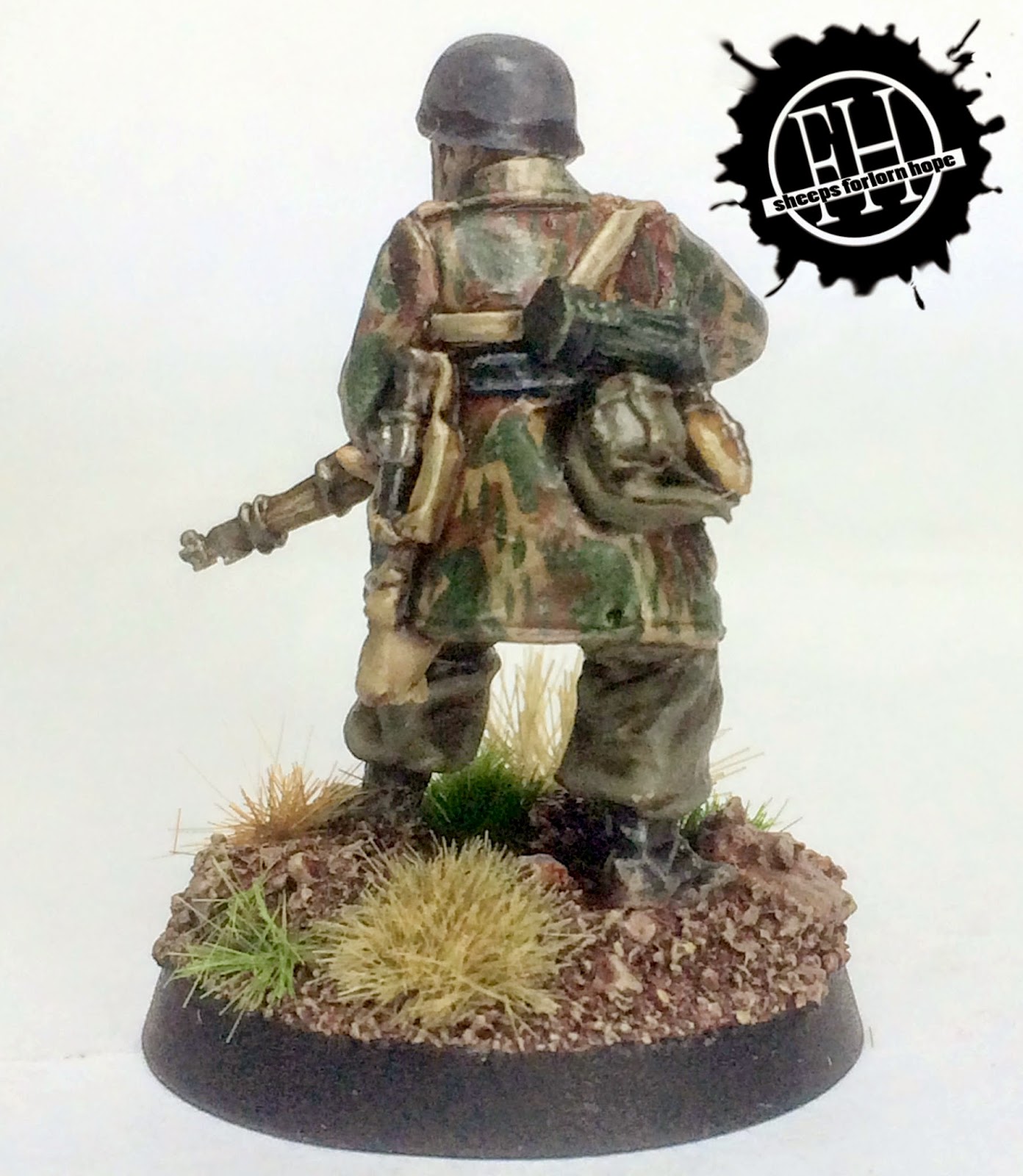 I have taken some liberties with the paint scheme of these minis, sacrificing some historical accuracy for a better Table mini. Historically the webbing and straps were a black or dark brown leather, this made the mini too dark and uninteresting, so I went for a beige.
The camouflage patterns are as accurate as I can be, whilst still maintaining my sanity, Fallschirmjager used a variety of patterns and colours during the war, and I want to be able to represent any time period with them, so I'm mixing and matching patterns and pants colours, it also keeps it interesting for me and I haven't gotten bored yet! 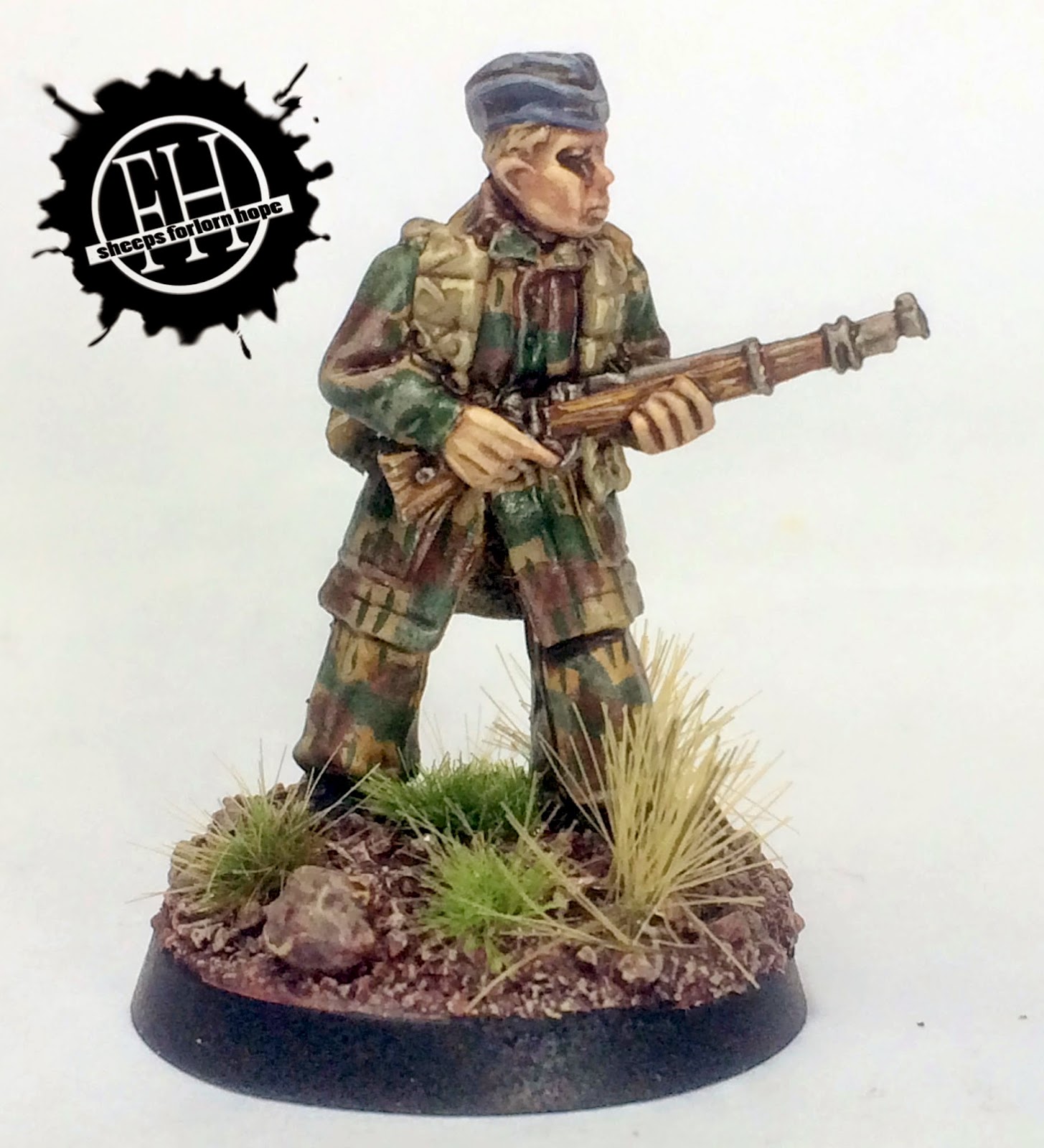 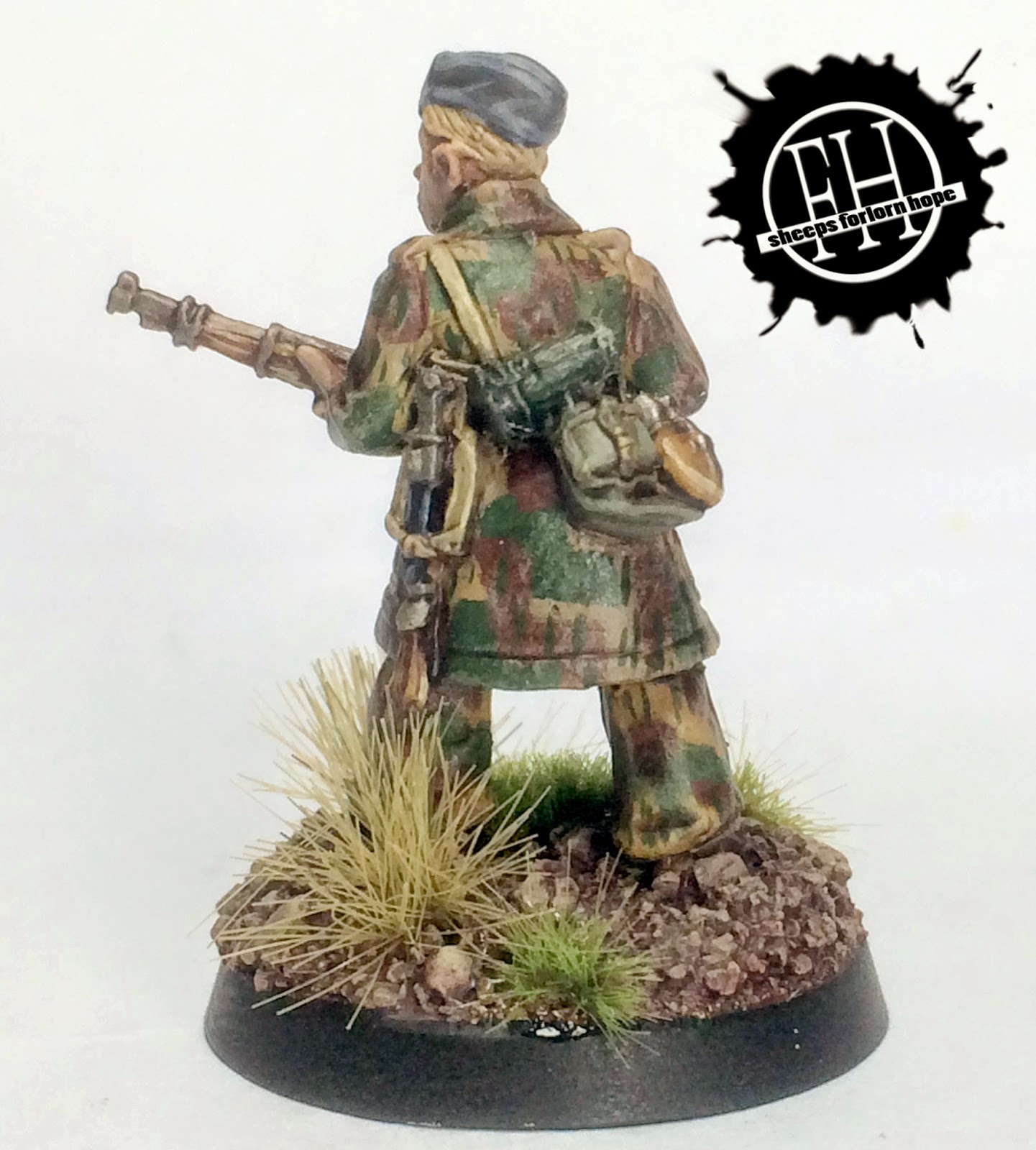 Finally a scale shot compared to some of my 40k minis, this is how big GW guardsman should be!

Hope you liked the start of this diversion, I'll be getting back into some 40k, terrain and gaming soon, so look out for that.