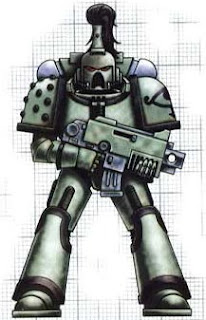 Now I've decided to devote my horde of FW marine Mks to the dark gods, and do the main protagonist forces of the Sons of Horus legion. I'll be doing them in the Sea green scheme, the sort of interim scheme between the Lunar Wolves and the Black Legion schemes, I think it will look striking on the tabletop, and more importantly to me be fun to paint and weather.

This is my first WIP model:

As I hope you can see, there is alot of Imperial fist casualties going on here, one because I think the yellow will look great as a spot colour/counterpoint and it sets them at the Siege of Terra, or just after when the Sons were chased into the eye.

I will be using the SW list, because its more competitive then the regular SM one (though we'll see what happens in 6th), plus I get to run terminators as troops, and since the SoH used them extensively, I think it fits.